Institute of Mathematical Statistics
Fostering the development and dissemination of the theory and applications of statistics and probability
Renew / Join IMS
Seeking old copies of the IMS Bulletin
December 15, 2019

The IMS would like to provide online access to all volumes of the IMS Bulletin. Currently, all issues since the beginning of 2002 are online, at https://imstat.org/ims-bulletin-archive/. However, prior to that we only have hard copies, which must be scanned. Since commercial scanning involves separating the pages, thus destroying the physical copy, we are keen to receive a donation of each old issue. So we were delighted to hear from Thea Khamis, daughter of the late Salem Khamis [whose obituary appears here] saying that she had found among his papers 44 issues of his copies of the Bulletin, from the very first issue.

So, if you have copies that you would be willing to donate—IMS will cover the shipping costs—please get in touch with Elyse Gustafson, erg@imstat.org, to discuss what to do.

The very first issue of the IMS Bulletin, in January 1972—pictured below—was introduced by its first editor, Leo Katz, who was also at that point also the IMS Executive Secretary:

“Following a considerable period of study and discussion, by the Executive Committee and the Council, concerning the feasibility and the advantages and disadvantages of separate publication of some of the less formal material which has been relegated to the back pages of the Annals [of Mathematical Statistics, which was just about to split into the Annals of Statistics and the Annals of Probability], the Council … voted to accept the creation of a new journal of news and notices and similar matters. It was decided that this new publication should contain abstracts of papers presented to the Institute of Mathematical Statistics, news and notices, announcements, general information concerning new members and new PhDs’ lists of new publications, reports of officers, and similar material (which has occupied, in the past, about 150 pages or more of each volume of the Annals).”

For the first year the Bulletin was issued five times, and between 1973 and 2004 it settled into six times per year. 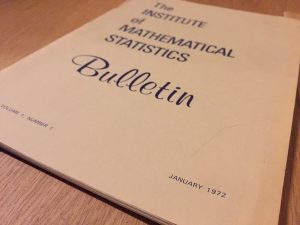 The very first issue of the IMS Bulletin, from January 1972