Institute of Mathematical Statistics
Fostering the development and dissemination of the theory and applications of statistics and probability
Renew / Join IMS
Obituary: Salem Khamis, 1919–2005
December 15, 2019

We recently learned that IMS member Salem Khamis had passed away in 2005 and no obituary was published in the Bulletin. This obituary is condensed (with permission) from Prasada Rao’s version that appeared in UK’s The Independent on Sunday newspaper, on 15 July 2005. 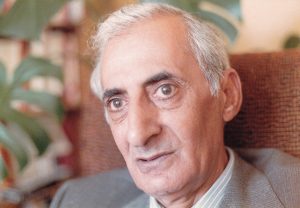 Salem Hanna Khamis was a mathematical statistician who became a senior functionary in the Food and Agricultural Organisation of the United Nations and an able administrator of newborn institutes for statistics in the under-developed world. His name is immortalized in the Geary–Khamis method of computing purchasing power parities (PPPs) of currencies, for conversion of national currency-denominated economic aggregates, like gross domestic product, into a common, comparable currency unit.

The most celebrated illustration of a PPP is the “Big Mac Index”, which compares the real value of different national currencies based on the differences in the prices of the Big Mac hamburger. However, for serious economic analyses in a globalized world economy, there is an acute need to determine accurate measures of PPPs of currencies based not on the price of a single consumer item but on the prices of a wide range of goods and services deemed of relevance in the expenditure patterns of the general public. This estimation of PPPs requires combining and aggregating prices from a large number of countries using sophisticated formulae based on both intuitive appeal and scientific rigour. It is in this context that the work of Salem Khamis made a lasting contribution to economic analyses on the world stage. Over the past three decades, PPPs of currencies have been calculated under the auspices of the International Comparison Project (ICP) of the United Nations using the Geary–Khamis method.

The method was first proposed by the Irish statistician R.C. Geary in 1952, and was developed by Khamis in a series of papers, notably “A New System of Index Numbers for National and International Purposes” published in the Journal of the Royal Statistical Society in 1972. It is now used extensively in the measurement of global inequality, living standards and the estimation of the human development index, by the World Bank, the OECD and the Food and Agriculture Organisation.

Although Khamis also made significant contributions to sampling theory and the tabulation of incomplete gamma functions, it is his work on index number theory and applications, and the development of the Geary–Khamis method, that has been indelibly imprinted on all the recent work on international comparisons of prices, real incomes, output and productivity.

Salem Khamis was born in a small village in the Nazareth district of Palestine in 1919. His early education took place in Jerusalem and at the American University of Beirut, from where he graduated with a BA in Mathematics and an MA in Physics. He travelled to England on a British Council Fellowship and took his doctoral degree in statistics at University College London. He also spent periods of time at Cambridge and Leeds and it was during this time that he met his lifelong partner, Mary Guy.

Khamis spent much of his working life as an international civil servant, from 1949 working for the United Nations in New York and from 1958 for the Food and Agriculture Organisation, a UN agency, first at the regional headquarters in Cairo and then at its international headquarters in Rome. Through his UN positions, Khamis played a dynamic role in setting up institutional structures in many developing countries to help gather, analyse and disseminate the essential statistics necessary for informed decision-making by politicians and the general public. For example, in Uganda, many generations of statisticians have been trained at the Institute of Statistics established at the Makerere University in 1969 and nurtured through its early years by Khamis.

Remarkably, Khamis managed to maintain an impressive academic profile through all these years of involvement in international statistical organisations notorious for endless meetings and frequent travel missions to member countries. He held appointments at the Syrian University, where he was Professor of Applied Mathematics in 1948–49, and at the American University of Beirut, where he was Professor of Mathematics, 1955–58. In 1955 he was elected a member of the International Statistical Institute, and served as its Vice-President, 1979–81.

Khamis maintained a strong bond with his motherland. He was a passionate and vigorous supporter of the establishment of a Palestinian homeland. He was endowed with brilliance and endless curiosity; fearlessness in his support for the just rights of his fellow human beings; and a passion for the less privileged and the poor.

Salem Khamis’s family created a charitable educational trust in his memory, to provide scholarships to Palestinian students of mathematics and statistics, through the Friends of Birzeit University. Three have so far completed their studies, as of the end of 2019. Donations are welcome: https://fobzu.org/scholarships/