The Inaugural World Laureates Association (WLA) Prize award ceremony took place on 6 November during the Opening Ceremony of the WLA Forum in Shanghai. The winner of the WLA Prize in Computer Science or Mathematics is Michael I. Jordan, “for fundamental contributions to the foundations of machine learning and its application.” Jordan is Professor of Department of Electrical Engineering and Computer Sciences and the Department of Statistics at UC Berkeley. Among many honors, he was the Grace Wahba Lecturer in 2022. 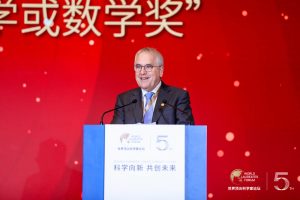 In his prize acceptance speech, Jordan encouraged youngsters to explore and learn widely and then choose one field to carry out more profound research. He also predicted that a new discipline in engineering based on Intelligence Science, Statistics, and Economics would soon come into existence, leading the world to a multi-data era. The first discipline in the engineering field was closely related to users’ preferences, values, and decisions. According to Jordan, the three missions of the World Laureates Association (WLA) went along miraculously well with what people expected from Machine Learning and Artificial Intelligence in the future, with them unanimously agreeing that international cooperation would lead to prosperity.

Jordan commented on the significance of this major international prize being awarded to a statistician, despite its title being Computer Science or Mathematics. “Given that precedent, future winners may also be statisticians,” he noted.

The other WLA Prize is awarded in Life Science or Medicine: the 2022 winner is Dirk Görlich, Max Planck Institute for Multidisciplinary Sciences, “for key discoveries elucidating the mechanism and selectivity of protein transport between the cytoplasm and nucleus.”

The World Laureates Association Prize is a new international science prize, initiated in Shanghai in 2021 by the World Laureates Association (WLA), managed by the WLA Foundation, and exclusively funded by Sequoia China, a venture capital firm. The WLA Prize aims to recognize and support eminent researchers and technologists worldwide for their contributions to science. It is intended to support global science and technology advancement, address challenges to humanity, and promote society’s long-term progress. The total award for each Prize, which may be divided among up to four laureates, is RMB 10 million (approximately US$1.5 million).