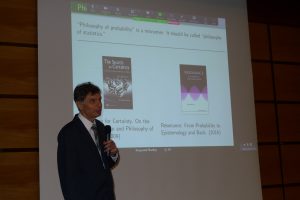 My presidential address is risqué… I am going to talk about a narrow topic in the philosophy of probability. My main point is a piece of practical advice. We should stop using the term “subjective” in reference to any part of statistics.

Let me start by presenting the context of my remarks. “Philosophy of probability” is a misnomer. In the IMS community, it should be called “philosophy of statistics” because the term “probability” is applied to a field of mathematics and “statistics” refers to both mathematical statistics and a branch of science dealing with data. Hence, by publishing two books on philosophy of probability, I contributed indirectly to statistics. The books were The Search for Certainty. On the Clash of Science and Philosophy of Probability (2009) and Resonance: From Probability to Epistemology and Back (2016). My main theses presented in the books were:

(iii) The only way to reconcile (i) and (ii) is to admit that de Finetti’s and von Mises’ philosophical theories have nothing in common with statistics as we know it.

(i) “Happy subjectivity,” meaning unfettered freedom. What genre of music is the best: classical, jazz or rap? Your answer is completely arbitrary and it depends only on how you feel in the moment.

(ii) “Dark subjectivity” is a contaminant of rational thinking. I will illustrate it by citing the book The Subjectivity of Scientists and the Bayesian Approach by S. James Press and Judith M. Tanur (2016). The authors devoted a chapter to each of about 15 top scientists of all time, including Aristotle, Galileo, Newton, Darwin, Pasteur, Freud, Einstein, and Curie. Every case was different, but every scientist discussed in the book took an action or made a statement that we would nowadays consider unscientific. (The title of the book suggested to me that the authors might have been anti-Bayesian. In fact, they are Bayesians. They included an extra chapter in their book with Bayesian advice to future scientists on how to avoid errors committed by the historical figures.)

So, I argue that Bayesian statistics is not subjective in either of these senses of the word. First, let’s talk about happy subjectivity. Nobody will be appalled if someone says, “I am listening to jazz because today is Tuesday and I am in a good mood.” Actually, you do not have to give any reason for listening to jazz, but you can if you want to. Can a Bayesian statistician choose Beta(7,32) prior because today is Tuesday and she is in a good mood?

So far I have discussed my long-term obsessions. Now I will list some of my greatest current concerns. These four events, in chronological order, have shaken the whole world, and my personal world:

(ii) the murder of George Floyd, and anti-racism protests,

(iii) the 2020 US presidential elections,

(iv) the Russian invasion of Ukraine.

These events are complex and completely different. What they have in common is that in each case, large populations have contradictory beliefs about factual matters. I emphasized “factual” because we are not scandalized by people having diverse views on politics, religion or social matters. In relation to Covid, let me point out that a large group of people believe that vaccines cause autism. In relation to the US presidential elections, note that a large part of the US population believes that the results were falsified. Let me briefly mention racism and antisemitism so that it is clear that I do not believe that troubles of this type started only two years ago.

What do these four major events have to do with main topic of my address, i.e., probability and subjectivity?

Epistemology, the philosophical theory of knowledge, is as old as (Western) philosophy. There are different epistemological theories. Let us consider a very simple three-step scheme: data, statistical analysis, and dissemination of information. (I have presented the scheme in the language appropriate for science. The equivalent scheme for the everyday context consists of personal observations, information processing by our brains, and dissemination of information.) Each one of the three stages of the knowledge creation process is subject to random errors—this is how probability enters the picture. My main concern here is the third stage, the dissemination of information. Every person has to decide which information sources are reliable (once again, we encounter probability because a “reliable” information source presents truth with high probability). At this point, happy subjectivity may strike. People may choose information sources that address their emotional needs instead of supplying the unembellished truth. Or one could label this phenomenon the dark subjectivity, a contaminant of rational thinking.

How dangerous is subjectivism? Not very. However, it is not very dangerous for the wrong reasons. Subjective philosophy of probability is a poor cousin of relativism. Subjectivism claims that there is no objective probability. Relativism claims that there is no objective truth. Hence relativism is similar to subjectivism except that the main claim is amplified thousandfold. Relativism is a significant element of postmodern philosophy. It has already percolated to general culture. I note parenthetically that relativism is an excellent example illustrating chickens coming home to roost. Relativism was developed by extreme left-wing philosophers. It has now been successfully implemented by right wing propagandists.