Institute of Mathematical Statistics
Fostering the development and dissemination of the theory and applications of statistics and probability
Renew / Join IMS
Remembering Sir David Cox 1924–2022
February 16, 2022

“A giant in the field of statistics” passes away 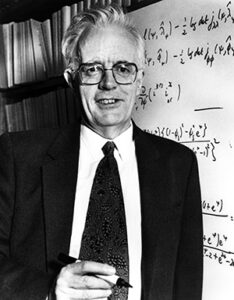 Prominent British statistician Sir David Cox has passed away at the age of 97. Cox, who was described on the awarding of the inaugural International Prize in Statistics as “a giant in the field of statistics,” made many contributions including introducing logistic regression, the proportional hazards model and the Cox process, a point process named after him.

In the Royal Statistical Society’s announcement of his passing, it is noted that, “As well as his immense contributions to statistical research, Sir David will be remembered as a boundlessly generous and supportive friend to generations of statisticians. His kindness and humility were as remarkable as his genius.

“His long career in statistics, which included a remarkable 25 years editing the statistics journal Biometrika (1966–1991), carried on well into his 90s. In 2014 he gave an RSS 180th anniversary lecture on Statistics past, present and future, and in 2018 he spoke In gentle praise of significance tests at the RSS Annual Conference.

“He received the Royal Statistical Society’s highest honour, the Guy Medal in Gold, in 1973 (the same year he was elected a fellow of the Royal Society), and was RSS President during the period 1980–1982. He was knighted in 1985 and in 2010 was awarded the Royal Society’s prestigious Copley Medal, an award previously given to other towering figures such as Stephen Hawking and Albert Einstein.”

A full obituary will be published in due course.