Institute of Mathematical Statistics
Fostering the development and dissemination of the theory and applications of statistics and probability
Renew / Join IMS
Obituary: Elizabeth Meckes 1980–2020
February 23, 2021 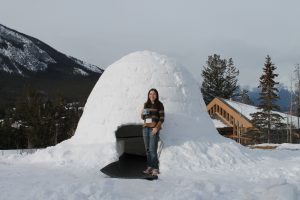 Elizabeth Meckes (photo taken during the March 2013 BIRS conference on The interplay of convex geometry and Banach space theory, held at the Banff Center)

In 2019, Elizabeth Meckes was elected a Fellow of the IMS. She won a Simons fellowship for the 2020–2021 academic year, so she, her husband Mark, and their two children Juliette and Peter, traveled to Oxford to spend the year visiting Jon Keating. Sadly, late in 2020 she was diagnosed with colon cancer and passed away a few weeks later, only six months after her fortieth birthday. Even though she was young and MathSciNet lists only 27 papers, she left a considerable mathematical legacy.

Elizabeth received her PhD from Stanford in 2006, working with Persi Diaconis. Her thesis concerned an “Infinitesimal version of Stein’s method,” which she developed into a powerful tool for solving problems. Closely related to her thesis is a paper with Sourav Chatterjee on a multivariate version of the method of exchangeable pairs, a method that had previously been applied only to univariate distributions but due to their work it has now become part of the standard toolbox. With 148 citations, according to Google Scholar, this is her most cited work. If you want to learn about exchangeable pairs there is a survey by Chatterjee, Diaconis, and Meckes in volume 2 of Probability Surveys.

After graduating from Stanford in 2006, she spent a year at Cornell supported by an AIM fellowship and working with Laurent Saloff-Coste. He remembered her as “a very able mathematician with talent for hard computation.” After the year at Cornell, she returned to her alma mater Case Western Reserve in 2007 with her husband Mark (he earned his bachelor’s degree in mathematics there in 1999, and his PhD there in 2003, co-advised by Stanislaw Szarek and Elisabeth Werner).

In 2007, Mark and Elizabeth wrote their first joint paper. It concerned normal approximations of linear functions of high-dimensional random vectors with symmetries. To quote Math Reviews, “The essential tool is Stein’s method of exchangeable pairs, which is used in this context for the first time. One of the advantages of Stein’s method is that it yields rather precise rates of convergence.”

In 2011, she wrote a ground-breaking paper with Matt Kahle on random simplicial complex. For a mental picture, think of a lot of triangles glued together along their edges. These objects are a multidimensional generalization of Erdős-Rényi random graphs and have a phase transition. The topology of these complexes is boring when the number of triangles is small or too large. However, in a narrow range of values the topology is quite complicated, when measured by their Betti numbers. Remarkably Kahle and Meckes were able to prove a central limit theorem for the Betti numbers. The mathematics in this paper required a synthesis of ideas from algebraic topology, combinatorics, and geometric measure theory.

Elizabeth wrote a large number of interesting and important papers on random matrices, often in collaboration with her husband Mark. They introduced new ideas and tools for proving concentration inequalities for spectra of random matrices. One paper of theirs was published in the prestigious journal Probability Theory and Related Fields. Concerning that paper, Elizabeth wrote on her web page. “I think of this paper as being unofficially dedicated to our children: Peter, who stubbornly refused to be born while most of the work in this paper was done; and Juliette, who told me one morning that it would make her happy if I proved a theorem that day (I’m pretty sure it was what became Theorem 3.5).”

An example of Elizabeth’s work that illustrates its breadth and depth is “Projections of Probability Distributions: A Measure-Theoretic Dvoretsky theorem” that was published in Geometric Aspects of Functional Analysis. This paper is an elegant piece of pure mathematics but is of fundamental importance in the foundations of data science. Specifically, her work on very low dimensional marginal of high dimensional probability measures are being used in compressive sensing.

In 2018 she and her husband Mark finished a textbook for a first rigorous course in Linear Algebra, which to quote her web page is imaginatively titled Linear Algebra. A reviewer writing in MAA Reviews said, “One outstanding feature of the book is the authors’ writing style, which is clear, conversational and humorous, while at the same time rigorous and informative. The level of sophistication of the text rises as the book progresses, but even at the end the book is still quite readable and accessible.”

In the summer of 2019, Elizabeth published a book on The Random Matrix Theory of the Classical Compact Groups. To quote from the description on the Cambridge University Press website, “This is the first book to provide a comprehensive overview of foundational results and recent progress in the study of random matrices from the classical compact groups, drawing on the subject’s deep connections to geometry, analysis, algebra, physics, and statistics.” Jon Keating, whose group at Oxford she joined for a year said, “Her papers have opened up new avenues of research and her book was an extraordinary achievement.”

From this brief description of her research you can see that she worked on a wide variety of topics, being “most interested in situations in which probability arises naturally in other fields, e.g. differential geometry, convex geometry, and number theory.”

The next Southeastern Probability Conference, to be held May 2021, will honor Elizabeth’s life and work. Eight of her collaborators and friends will speak. [See https://services.math.duke.edu/~rtd/SEPC2021/SEPC2021.html]. The bad news is that the conference will be virtual, but the good news is that because of this many people from across the country and beyond will be able to participate via Zoom.

The Spring 2021 Hausdorff Trimester on “The Interplay between High-Dimensional Probability and Geometry” has been dedicated to Elizabeth: http://www.him.uni-bonn.de/programs/current-trimester-program/interplay-high-dimensional-geometry-probability/description/. Their Winter School, which took place January 11–15, featured a talk by Persi Diaconis on Elizabeth’s work, a recording of which can be found on their website.