Institute of Mathematical Statistics
Fostering the development and dissemination of the theory and applications of statistics and probability
Renew / Join IMS
Obituary: Joseph (Yossi) Yahav 1935–2016
August 13, 2020 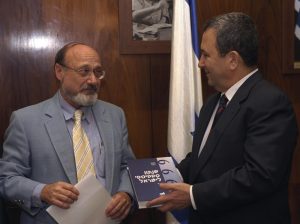 Joseph A. (Yossi) Yahav, Vigevani Professor Emeritus of Statistics and Agricultural Economics at the Hebrew University of Jerusalem, died in Jerusalem on August 6, 2016, at the age of 81. In addition to his highly original research contributions, Yossi was one of the founders of modern statistics in Israel.

He obtained his PhD at the University of California, Berkeley in 1963, where he was supervised by David Blackwell, following his undergraduate degree in Economics and Statistics at the Hebrew University and further studies at Stanford. After teaching at Berkeley, he returned to Israel in 1965, with an appointment at the University of Tel Aviv. Shortly after arriving, he founded the Department of Statistics at the University of Tel Aviv and became its first chair. He grew the Department, broadening it to include operations research, population genetics, mathematical economics and game theory. In 1976, after Tel Aviv graduated its first PhD student, Yossi moved to the Hebrew University where he held a chair in Statistics and Agricultural Economics. He became Dean of Social Sciences in 1980, serving until 1986. After stints as chair of both the Statistics and Agricultural Economics Departments, he was appointed Vice President for Finance of the Hebrew University in 1991 and held that position until 1993.

He became National Statistician and Head of the Central Bureau of Statistics of Israel serving from 1993 to 2001.Although his background was in theory, Yossi threw himself into this position introducing a number of important innovations including, the Social Survey which has become the main source of information on living conditions in Israel, a website and database, the first to do so among national statistical offices in the world., He developed methods for integrating administrative data with sampling in the Israeli Census, a significant methodological contribution.

Among other honors, Yossi served as President of the Israel Statistical Association. He was selected as a fellow of the Institute of Mathematical Statistics and elected a member of the International Statistical Institute.

His thesis was in sequential analysis and he made several important contributions to this area. A very significant one was the introduction of the notion of asymptotic pointwise optimality of sequential procedures, which he developed, partly in collaboration with me.

He made a number of other contributions, to ranking problems, estimating the proportion of unseen species, the bootstrap, and econometrics. A paper on Renewal Theory in the Plane gained a footnote in volume II of Feller’s famous Probability Theory.

Yossi was a man of broad interests, who had a talent for uniting theory and practice and for asking fruitful questions. In our collaborations in sequential analysis and renewal theory it was he who asked the basic questions.

Above all, Yossi had qualities which are reflected in his achievements. He was a wonderful human being, astute, broadly intelligent and caring. He continues to be mourned by me and his many other friends.