Institute of Mathematical Statistics
Fostering the development and dissemination of the theory and applications of statistics and probability
Renew / Join IMS
Obituary: Thomas M. Liggett 1944–2020
July 16, 2020 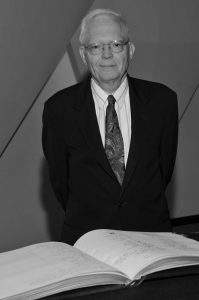 Tom Liggett, on the occasion of his induction into the US National Academy of Sciences, in 2009 (he was elected in 2008)

Tom Liggett passed away May 12, 2020 in Los Angeles at the age of 76. According to Wikipedia, Tom Liggett moved at the age of two with his missionary parents to Latin America, where he was educated in Buenos Aires (Argentina) and San Juan (Puerto Rico). He graduated from Oberlin College in 1965, where he was influenced towards probability by Samuel Goldberg, an ex-student of William Feller. He went to graduate school at Stanford, taking classes with Kai Lai Chung, and writing a PhD thesis in 1969 with advisor Samuel Karlin. (Karlin had 44 students, including my adviser Don Iglehart, which means I should call him Uncle Tom.) He joined the faculty at the University of California, Los Angeles, in 1969, where he spent his career, retiring in 2011 but remaining active in the department until shortly before his death.

Tom’s first really impressive result was a 1971 paper with Mike Crandall on nonlinear semigroups. At about the time this paper was written, Chuck Stone showed Tom a copy of Frank Spitzer’s 1970 paper on Interacting Particle Systems, saying, “I think you’ll find something interesting in this.” The rest, as they say, is history. In 1972, Tom wrote a paper proving the existence of interacting particle systems using the Hille–Yoshida theorem for linear semigroups. His St. Flour Lecture Notes published in 1977 helped spread the word about the field to a broad audience of probabilists.

Tom’s 1985 book, which has been cited more than 5000 times, helped grow interacting particle systems into a lively and vibrant area. By the time he wrote his 1999 book, the field had grown so large that he concentrated on only three examples: the contact process, the voter model, and the simple exclusion process. His books and papers are known for their clear and elegant proofs, though for those of us who are not as smart as he was, they can take some effort to digest.

A fuller account of Tom’s research can be found in the July 2008 article in the IMS Bulletin on his induction into the National Academy of Science.

Tom had only nine PhD students: Norman Matloff (1975), Diane Schwartz (1975), Enrique Andjel (1980), Dayue Chen (1989), Xijian Liu (1991), Shirin Handjani (1993), Amber Puha (1998), Paul Jung (2003), and Alexander van den Berg-Rodes (2011). Despite the small number of academic children, his family tree goes deep in Brazil. As they say in the Bible, Andjel begat Pablo Ferrari, who begat Fabio Machado who combined for a total of 34 descendants. The psychology of how students choose their advisers is mysterious, but as Amber Puha writes in the report on Tom’s 75th birthday party last year (June/July 2019 issue of the IMS Bulletin), she found him to be an ideal adviser.

Over Tom’s career, he mentored numerous postdoctoral fellows and young researchers. A glance at his publications since 2000 (https://www.math.ucla.edu/~tml/post2000pubs.html) shows he had too many collaborators for me to list here. While I was at UCLA, we talked a lot about math but we did not do much joint work since we had very different styles. It takes me months to years to pursue an idea to solve a problem, but Tom seemed to go from idea to solution to completed paper in a few days. One paper on which I could work at his speed was “On the shape of the limit set in Richardson’s model”. I was on my way to the Friday afternoon probability seminar at USC when Tom popped out of his office and said, “It has a flat edge.”

Two of our other joint papers come from his solving a problem that I was working on with someone else, which I believe is a common occurrence on his publication list. We no longer have access to his agile mind, but you can still see it at work in 106 papers and his two books on interacting particle systems.

Tom will be missed by his wife Christina, his children Tim and Amy, his colleagues at UCLA and students and researchers throughout the world.