Institute of Mathematical Statistics
Fostering the development and dissemination of the theory and applications of statistics and probability
Renew / Join IMS
Obituary: Kenneth G. Russell 1950–2019
July 16, 2020 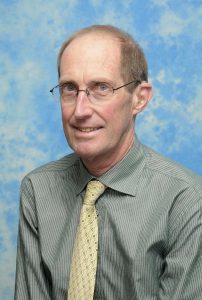 Ken Russell’s death, on 16 July 2019, ended a passionate involvement with the discipline of Statistics that lasted almost 50 years. It is not unusual for people to have a passion for (some of) what they do. But very few would wear the mantle of Passionate Statistician as well as Ken did.

Two famous statisticians who did so were Florence Nightingale and William Sealy Gosset. It will not surprise anyone who knew Ken to learn that, during a sabbatical stay at the University of Southampton, where he collaborated with Sue Lewis, he made pilgrimages to sites commemorating these two passionate statisticians. When he visited the Guinness Brewery in Dublin, Ken’s focus was not the usual one of recreational use of “enhanced” Liffey water. Rather, he explored the brewery’s statistical memorabilia and bought himself a tie, of which one of us (DG) is now the proud owner. On the occasion of the 100th anniversary of Gosset’s famous 1908 publication in Biometrika on “The probable error of a mean”, Ken organised a well-attended—and even better remembered—“Student’s tea party”. He also greatly admired the “Lady With the Lamp”: statistician, social reformer, hospital manager, pioneer in quality control and founder of modern nursing. We can only guess at what special function Ken would have organised to celebrate this year’s 200th anniversary of the birth of Florence Nightingale, but we can be sure that it would have been a good one.

The oldest of five brothers, Ken was born in Adelaide and grew up in Sydney’s northern beaches, a relatively unpopulated area at the time. Ken was in the foundation cohort of his high school. This may have contributed to his development of skills in organising the social activities of his peer groups, such as the local tennis club and church youth fellowship. Ken loved his tennis, and was a good player, but increasing health issues ensured that he would not be a great one. He did, however, have a role in organising Australia’s Junior Davis Cup squad. His health problems were shared with the oldest two of his siblings, one of whom died in his teens, the other in his early thirties. The other two brothers were unaffected, and both survive Ken.

After completing a Bachelors’ degree at the young Macquarie University, Ken committed to Statistics when he enrolled in a Master of Statistics degree at the University of New South Wales. A doctorate followed under the supervision of John Eccleston, who became a life-long friend and career-long occasional collaborator. Ken became a tutor and then a lecturer at the University of New South Wales. While there, he took on his first significant role in organising statisticians, as secretary of the New South Wales branch of the Statistical Society of Australia.

A desire to experience the wider world and the fact that New Zealand academic salaries were, at that time, higher than in Australia, led Ken to move to Wellington, where he took up a lectureship at Victoria University. He formed many friendships there, but came back to Australia in 1985 to take up a position at the University of Wollongong, where he spent most of the rest of his life. Ken brought back with him to Wollongong an additional “family member,” a kidney uncharacteristically named “Ocker”, who kept him alive for 40 years.

He thrived at Wollongong, but left briefly to join the “coalface” of statistical design and analysis in the Victoria Department of Agriculture. We were delighted to lure Ken back to Wollongong in 1989 to take up a newly created role as Director of the Statistical Consulting Service. Ken organised not only the smooth operation of the service, but also many other things, most notably an outstanding teaching career (recognised within and beyond the University of Wollongong by several teaching awards, and by the many students who said that he was the best lecturer they ever had). One of us (MPW) was taught by Ken as an undergraduate student at the University of Wollongong, and fondly remembers Ken’s neat handwriting as well as his—much more important—care and diligence as a teacher.

Ken also developed an expanding network of research collaboration. His contribution to their academic growth and personal development was widely appreciated by junior colleagues in the School of Mathematics and Applied Statistics, as it became, and by researchers, graduate students and honours candidates in many disciplines across the wider University and beyond. He also consulted occasionally for industry, one notable example being the development of new work rosters for the company that runs the tugboat service at Port Botany, in Sydney.

Given his avowed stance of not imposing his health problems on any partner, Ken surprised his many friends and colleagues when he announced his intended marriage to Janet, his partner in a very happy and fulfilling marriage for the last ten years of his life. Their marriage followed the death of Janet’s first husband, who, like Ken, had had a kidney transplant in Wellington. Through this association, all three had become good friends. Janet joined Ocker as the second Kiwi member of Ken’s enlarged family. The confirmed bachelor’s life changed markedly. He even came to enjoy non work-related travel. But he also took on a professional challenge, a chair at Charles Sturt University in WaggaWagga, New South Wales. Of course, he had a strong impact there as well.

When he retired, Ken and Janet returned to Wollongong. During his remaining years, Ken retained his Charles Sturt University association, but also took an honorary position at Wollongong. Someone with his skill and enjoyment of teaching could not resist doing more. He also co-developed a subject for teaching at the University of Newcastle, Australia. All of these tasks were taken on with enthusiasm and success, but his statistical passion in retirement focused most on writing a book, Design of Experiments for Generalised Linear Models, published by Chapman and Hall.

Ken is remembered for his humanity, friendship, loyalty and kindness, and for being conscientious in everything he did. These traits, and his career as a statistician, live on through the shared memories of family, friends, colleagues and students. And the career lives on through the many successful careers of those he influenced and his published works, most notably his book published in December 2018, just months before his death.