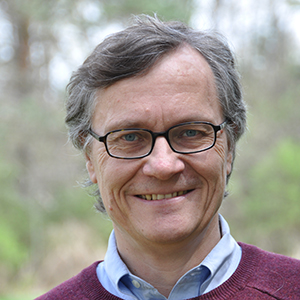 Laurent Saloff-Coste received his PhD in 1983 at Université Pierre et Marie Curie (now, Sorbonne University) under the supervision of Nicholas Varopoulos. In 1992, he became Directeur de Recherche for the Centre National de la Recherche Scientifique at the Université Paul Sabatier, in Toulouse. In 1998, he moved to Cornell University, where he is the Abram Rogers Bullis Professor of Mathematics. Laurent’s research interests revolve around the interactions of probability theory with analysis and geometry. This includes card shuffling problems, random walks on all kinds of groups, heat diffusion on Riemannian and sub-Riemannian manifolds, potential theory, and Dirichlet forms on metric measure spaces. He received the Rollo Davidson Prize in 1994 and was a Guggenheim research fellow in 2006. He is a Fellow of the IMS, of the American Mathematical Society and of the American Academy of Arts and Sciences.

The classical gambler’s ruin problem asks for the probability that player A wins all the money in a fair game between two players, A and B, when a total of N tokens are in play and player A starts with n of them (hence B starts with N−n). Our starting point is a fair game of this sort involving three players, A, B, and C, holding a total of N tokens. At each stage of the game, two players are selected; they play a fair game, at the end of which they exchange one token. This simple problem raises many questions such as: Given that each player still holds some tokens, what is the distribution of the players’ holdings? And, when one of the players loses all of her/his tokens, what is the distribution of the holdings of the remaining two players? What if there were four players in the game?

One way to abstract these problems is to consider an infinite, locally finite graph (think of the d-dimensional grid, or some variation of it). Given a finite domain U (a subset of vertices which forms a connected sub-graph), we can perform simple random walk in U until the walk hits the boundary. In the gambler’s ruin problem with three players, the random walk follows the number of tokens (a,b) held by players A and B. It involves the usual unit moves along each of the two axes of the square grid as well as the diagonal moves from (a,b) to either (a+1,b−1) or (a−1,b+1). The domain U and its boundary are given by the equations a=0, b=0 or a+b=N. In the general case which covers many problems of interest, we can ask the same questions: What is the distribution of the random walk at time t, given it has not yet exited U? What is the distribution of the exit point (the so-called harmonic measure)? For what kind of domains can we give some sort of answer to these questions?

This talk is based on joint work with Persi Diaconis and Kelsey Houston-Edwards.