Alan Welsh has developed useful new methodology, derived the properties of these and other methods and clarified relationships between different statistical methods, all in a particularly wide variety of problems. He has developed innovative new models for count data with many zeros and compositional data, including for longitudinal and clustered forms of these data. He has made important contributions to inference, robustness, the bootstrap and model selection for mixed models. His research on applications of smoothing methods to clustered data demonstrated that remarkable improvements can be achieved by taking proper and careful account of the dependence structure when constructing a smoother. Professor Welsh contributed to resolving how to do maximum likelihood estimation for sample survey data and, in ecological survey analysis, he made especially important contributions to distance sampling and occupancy modelling. All this work, and more, has the characteristic of theoretical depth combined with substantial practical relevance.

The Hannan Medal, awarded by the Australian Academy of Science, recognizes research in any of the fields of statistical science, pure mathematics, applied mathematics and computational mathematics and is made in one of those three areas in turn at two-yearly intervals. It honors the contribution to time series analysis of the late Professor Edward J. Hannan, FAA, Professor of Statistics at the Research School of Social Sciences of the Australian National University.

The Hannan award is made for research carried out mainly in Australia. Work carried out through a candidate’s entire career is taken into consideration but special weight is given to recent research.

You can watch a video about Alan Welsh’s award. 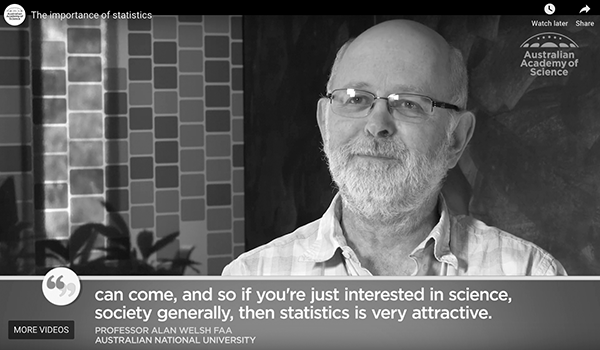