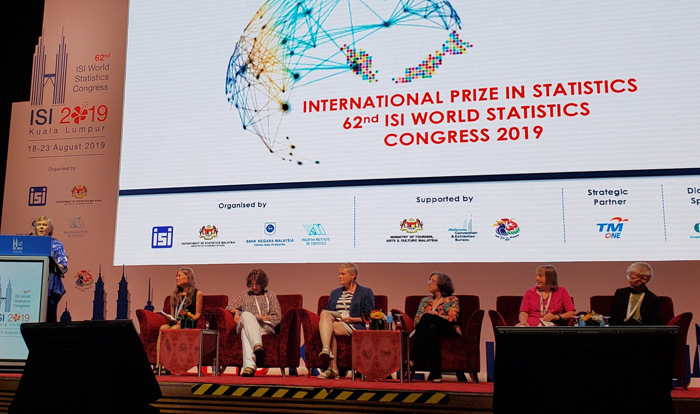 The second International Prize in Statistics was presented to the winner, Bradley Efron

At the congress, the second International Prize in Statistics was presented to the winner, Bradley Efron, professor of statistics and biomedical data science at Stanford University. He received the prize in recognition of the “bootstrap,” a method he developed in 1977 for assessing the uncertainty of scientific results that has had extraordinary impact across many scientific fields. Brad Efron participated in the award ceremony through a video message; ISI President Helen MacGillivray received the prize certificate on his behalf. Brad also gave his prize-winner’s lecture via a video linkup.

The lecture, “Prediction, estimation, and attribution,” examined the changing scientific needs and computational limitations that have fashioned classical statistical methodology. According to his abstract: “Large-scale prediction algorithms—neural nets, deep learning, boosting, support vector machines, random forests—have achieved star status in the popular press. They are recognizable as heirs to the regression tradition, but ones carried out at enormous scale and on titanic data sets. How do these algorithms compare with standard regression techniques such as Ordinary Least Squares or logistic regression? Several key discrepancies will be examined, centering on the difference between prediction and estimation or attribution (significance testing).”

The other activities of the World Congress are detailed in the report by the organizers, at https://www.isi-web.org/images/WSC/2019/Report-62nd-ISI-WSC-2019.pdf