Institute of Mathematical Statistics
Fostering the development and dissemination of the theory and applications of statistics and probability
Renew / Join IMS
XL-Files: I am not Yo-Yo Ma
October 1, 2022

Contributing Editor Xiao-Li Meng has been in a case of repeated mistaken identity—a result, perhaps, of people seeing what they hope to see. He cautions against doing the same with your data…

If I am fortunate to have you as a frequent reader of the XL-Files, you might recall my encounter with Yo-Yo Ma on a flight in 2015. (The photo below documents the encounter.) If you ignore the fact that this is a rhetorical question, what would be your estimated probability that I could be mistaken for Yo-Yo Ma twice in one day?

It’s probably not trivial. There are some resemblances, I gather. We have similar builds, friendly smiles, age cohorts, eyeglasses, and even hair styles (but not necessarily the hair density or sparsity). If you are sufficiently tipsy, you might even think we look like brothers. But unless you are completely inebriated, I doubt it would be significant enough for you to bet any significant amount on the actual occurrence of the event where I would serve as multiple imputations for Yo-Yo Ma.

But since I asked, of course, the event has happened, and on a most memorable day of my over three-decade journey as a statistician. Pour yourself a glass of anything that relaxes you to indulge my story—I promise that there will be a serious statistical moral, not just a probabilistic musing.

September 10, 2022, was the day for the much delayed in-person induction ceremony by AAAS (the American Academy of Arts and Sciences) for its classes of 2020 and 2021. In the morning an informal gathering for the new members was held at AAAS’ headquarter, which happened to be only three blocks away from my shared apartment when I was a graduate student in the late 1980s. Reflecting on the fact that it took more than three decades for me to complete this three-block journey, I decided to catch up, by walking over 30 blocks to the afternoon ceremony at the Kresge Auditorium at MIT. It was a most memorable two miles of walk, not because it was on the Memorial Drive, but because I was in a full COVID-inspired and aspired gear, with a cap, sunglasses, mask, suit and tie, and dress shoes—finally I had an excuse to get them out of my closet. These are not exactly designed for jogging or long walks, but the sweat they induced served as a good reminder of the hardship of any long journey.

“Are you Mr. ‘Meng’?” As I was busy counting and reflecting on my blocks, an academic-looking gentleman crossed over the Drive, clearly nervous. “Yes?” My curiosity and ego soared concomitantly—could this AAAS thing work so swiftly? “Oh great,” his voice relaxed instantly, “I really want to thank you for your performance last night.” Oh no—it’s not the AAAS thing! It’s the entertaining opening celebration took place the night before, which featured an interview with Yo-Yo Ma, followed by a performance that requires no adjective, just as Yo-Yo Ma needs no introduction. But how could I embarrass a clearly excited fellow admirer of a greatest musician, especially as distinguishing unfamiliar faces with masks on is particularly challenging? Hoping that he would simply walk away with a fond memory, I offered a NCND (neither-confirm-nor-deny) smile. “Watching your performance was like meeting with Robert X…,” he continued, with a series of compliments amounting to a Turing test for my identity. Alright, there’s no way I could NCND my way out of this—the Turing test was too powerful. I had no idea who Robert X was, and indeed I didn’t even catch the last name and many other phrases followed.

“I’m sorry, but I am not Yo-Yo Ma.” The moment I uttered the truth, the gentleman was almost on the floor, or rather, street. “Oh my God, I’m so sorry. I just embarrassed myself so much.” That’s exactly how I was afraid he might react. He bowed deeply. “I saw you from a distance and thought that this would be my only chance to say thank you in person.” His torso swung asynchronously with his head, as he tried to explain the situation. I felt really bad for putting him in such an awkward position, literally and figuratively. I tried to interrupt his apology: “Well, you see that the name Ma and Meng could sound similar, so I didn’t catch the difference.” The moment I said it, I realized that I may have just made the situation worse, since I was implicitly blaming him for not pronouncing the name clearly.

Fortunately, Yo-Yo Ma came to the rescue. That is, a story told by Yo-Yo Ma at the opening celebration became a face-saver for both of us—we both laughed hard once I brought it up, since our story was almost like a rerun of Yo-Yo Ma’s, yet with an amusing twist.

Toward the end of the interview the night before, Yo-Yo Ma was asked what it is like to be a household name or face in his daily life. With a typical IGYA (I’m-glad-you-asked) smile, Yo-Yo Ma recalled an encounter in a Whole Foods market near where he lives. As he was picking up groceries just like any other customer, a lady approached him with an inquiry that is mostly reserved for celebrities: “Are you who I think you are?” “Yes?” A non-deny smile was all it took to send the satisfied lady away. But just as Yo-Yo Ma turned around to continue being an ordinary citizen, he overheard the lady whispering to her husband: “That’s Seiji Ozawa!” The audience almost brought down the hall. 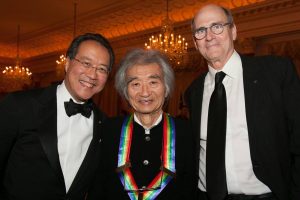 Surely if Yo-Yo Ma could be mistaken for [the legendary classical conductor] Seiji Ozawa, who is 20 years his senior and with a very different hair style, then mistaking Meng for Ma should be easily excused or at least expected. Indeed, my hypothesis was further supported by another encounter, during the reception after the induction ceremony. I was chatting with another new member, and this time without a cap or sunglass (but still with a mask). A couple walked over excitedly with the man extending his arm before even getting close to me, “Oh, I was hoping to thank …”, but before he could complete the sentence, the woman apparently had better eyesight and noticed my name tag, “Oh no, it’s not him!” she yelled at the man. Seeing another awkward posture as the man tried to change the direction of his hand while searching for words to complete his sentence, I offered a playful smile (under the mask), “I think I know who you think I am.”

“Never mind. I am such a schm…” he muttered, apparently finding the right words as he walked away hastily.

I was clearly amused by the double occurrence, so was Yo-Yo Ma, who wrote in a replying email, “I had a good laugh hearing about further identity mix-ups, especially after my wife remarked on your professional expertise in figuring out the probabilities! […] I will contact you immediately after someone thinks I am you. We’ll keep this going…!”

Whereas I’d be extremely delighted if a musician could ever be mistaken as a statistician, I’m deeply distressed by the thought that such mix-ups occur far more often than we realize or want to admit. Both gentlemen acted prematurely on their hastily formed pattern recognitions because of their strong desire to seize an opportunity for a particular (well-intended) outcome—to thank Yo-Yo Ma in person. This is not qualitatively different from many goal-oriented or driven data analyses, where the investigators rush to their conclusions because the suggestive evidence seem to fulfill what they hope to see.

There is one key difference, however. Whereas a mistaken statistician can declare, “I am not Yo-Yo Ma,” a misleading statistical result could never proclaim, “I am not the right one.” It is up to all the stat-struck investigators to separate the real stat from all the lookalikes. It’s a very daunting task in general, which has given Statistics the status as a discipline, not a fanfare. Indeed, the fact that these seemingly highly improbable mistaken identities could happen this often should serve as a good reminder of the vulnerability of human judgments to passion or desire.

The moral of all these stories, then, is that it is vital to be deliberately disinterested (not uninterested) in any statistical pursuits, and especially those that interest us most.