Institute of Mathematical Statistics
Fostering the development and dissemination of the theory and applications of statistics and probability
Renew / Join IMS
Obituary: Ole Barndorff-Nielsen 1935–2022
October 1, 2022 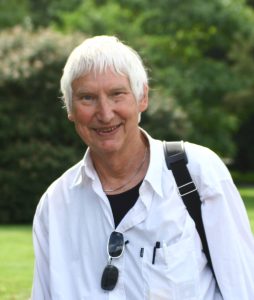 Ole Barndorff-Nielsen (1935–2022), photographed at the Lévy conference in Kopenhagen in August 2007; photo by Thomas Steiner

Ole Eiler Barndorff-Nielsen passed away on June 26, 2022, in Aarhus after a short period of illness. He was born in Copenhagen on March 18, 1935. He made vast contributions in several fields of knowledge, including statistics, probability, econometrics, and theoretical physics. The velocity at which the sad news of his death spread throughout the international community of statistics and probability is evidence of Ole’s exceptional and highly respected position internationally.

After studies in mathematics and actuarial science at the University of Copenhagen, Ole graduated in 1960 with a degree from the newly founded (in 1954) Department of Mathematics at Aarhus University, where he was hired as an assistant professor the same year. There he established and built a strong group of scientists working in statistics, probability and related areas, which he led over the following 45 years. He was one of the most cited and influential scientists in stochastics with a remarkable production of more than 200 scientific papers and eight textbooks written with more than 80 coauthors. His scientific production was comprehensive, as is clear from the brief review below of some of his most important contributions. An extraordinary curiosity and enthusiasm fueled his ambitious scientific work. Even at a very high age, he was eager to study newly developed areas within statistics and probability; for example, he initiated and developed the theory of ambit stochastics with collaborators over the last ten years of his life. Throughout his career, Ole was a generous, inspiring and supportive mentor and collaborator for numerous young scientists, many of whom have developed into leading experts in statistics, probability and mathematical finance.

Ole was undoubtedly one of the most important and visionary among those involved in building and developing the Department of Mathematics at Aarhus University. He also played important roles in two Danish National Research Foundation centers of excellence. He was a visionary scientific director of MaPhySto, which had a lasting effect on Danish mathematics. Later he played a central role in the econometrics center CREATES, where he initiated several cross-disciplinary collaborations. In 2014 he received the Rigmor and Carl Holst-Knudsen Science Prize in recognition of his lifelong contributions.

Internationally, Ole played an innovative and visionary role too. For example, he was a driving force in the creation of the Scandinavian Journal of Statistics and in the foundation of the Bernoulli Society, for which he served as chair of the European Regional Committee and later as a very influential president. He was the first editor-in–chief for the society’s highly ranked journal, Bernoulli. Ole was an Honorary Fellow of the Royal Statistical Society, a Fellow of the Institute of Mathematical Statistics, and an elected member of the International Statistical Institute. He received honorary doctoral degrees from Université Paul Sabatier, Toulouse, and KU Leuven, and in 2001 he joined an exclusive group of international scientists as recipient of the German Humboldt Prize. Moreover, he was a member of the Royal Danish Academy of Sciences and Letters and of Academia Europaea, and a corresponding fellow of the Royal Society of Edinburgh.

Early in his career, Ole made important contributions to the exact theory of exponential families and the foundations of statistics, in particular sufficiency and conditional inference. His book Information and Exponential Families in Statistical Theory is still a main reference. In 1977 he introduced the class of generalized hyperbolic distributions, thus formalizing heuristic ideas of Brigadier Ralph Alger Bagnold (who became a good friend) concerning the size distribution of sand. These distributions have turned out to be widely useful, for instance in turbulence and finance.

Later Ole contributed significantly to the asymptotic theory of statistics, his main contribution being what is now called the Barndorff-Nielsen formula, which he himself called the p*-formula. It gives the conditional distribution of the maximum likelihood estimator given an approximately ancillary statistic, generalizing a formula by R.A. Fisher. He collaborated closely with Sir David Cox on asymptotic theory. In this period, Ole was also involved in the investigation of what insights might be gained by applying differential geometric tools to statistical models, which—under weak regularity conditions—are Riemannian manifolds. One of his main contributions was the observed Riemannian geometry of a statistical manifold.

Perhaps Ole’s most widely influential work is his many contributions to financial econometrics. Main results were the Barndorff-Nielsen–Shephard model for the price of a financial asset, where the stochastic volatility was modelled by sums of Lévy-driven Ornstein–Uhlenbeck processes, and pathbreaking statistical methods for high-frequency financial time series. Much of this work was joint with Neil Shephard.

Ole was intrigued by the challenges and perspectives of developing an alternative theory of probability based on Voiculescu’s concept of free independence in place of the classical concept, and he contributed importantly to the theory of infinite divisibility and Lévy processes in free probability. Some of this work came as a result of Ole’s special connection to the Mexican scientific community, which was nourished by Ole’s long and close friendship with Victor Pérez Abreu. Simultaneously Ole contributed, jointly with Richard Gill and Peter Jupp, to statistical inference for quantum experiments and introduced quantum analogs of key classical statistical concepts.

Late in his life, Ole returned to his previous interest in turbulence in a highly original way by developing a new model type that he called ambit processes, where the state is given as an integral of a so-called Lévy basis over an ambit set. This is the set of points in space-time that are assumed to influence the present state. Ambit processes have also found applications in other research areas, e.g. growth modelling and brain imaging. Jointly with a group of young probabilists, Ole developed a new and vibrant area of probability theory, which he called ambit stochastics.

Ole was a very warm and positive person. His extraordinary intellect and indomitable optimism were main sources for his impressive career. Besides his scientific work, he was a passionate opera enthusiast and connoisseur with a special affection for Wagner. He was also a huge consumer of literature, spanning widely from classical novels to biographies. In 2018 he published his own autobiography entitled Stochastics in Science: Some autobiographical notes. Apart from describing Ole’s exciting life as a scientist, this book also gives a rare account on the developments in Danish and international probability and statistics since the 1950’s from the point of view of a first-hand witness and major contributor. Ole’s family was a crucial cornerstone in his life and he never missed an opportunity to emphasize the significance of the lifelong love and support from his wife, Bente.

Ole Eiler Barndorff-Nielsen will be greatly missed at Aarhus University, in the national and international stochastics communities and by numerous friends and colleagues worldwide, who can all find some consolation in their good fortune and privilege of having known him.