Institute of Mathematical Statistics
Fostering the development and dissemination of the theory and applications of statistics and probability
Renew / Join IMS
Obituary: Bert Fristedt 1937–2020
October 1, 2022 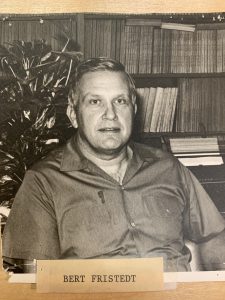 Bert was born on April 8, 1937 in Minneapolis. He spent his entire life in Minnesota, with the exception of his time in graduate school and one year each at the University of Wisconsin–Madison, and Liverpool University. He obtained a BS in mathematics from the University of Minnesota in 1959. His PhD thesis in mathematics, “Generalized variations, continuity, and Hausdorff measures of sample functions of stochastic processes with independent increments,” was obtained from the Massachusetts Institute of Technology under the direction of Henry McKean in 1963. Except for the two years in Madison and Liverpool and one year at Carleton College, Bert spent his entire academic career, 1963–2017, at the School of Mathematics, University of Minnesota.

Bert worked in the area of probability theory. From the 1960s into the 1980s, he followed the direction established by his PhD thesis, performing deep and detailed analysis of the behavior of Lévy processes. Primarily because of this work, he became a Fellow of the IMS in 1986. His collaborators at the time included several other IMS Fellows: David Aldous, Donald Berry, Patrick Fitzsimmons, Ronald Getoor, Priscilla Greenwood, William Pruitt, Larry Shepp, and James Taylor. Bert’s work with James Taylor earned him an Erdős number of 2. His publications appeared in the top journals for probability and statistics, including the Annals of Mathematical Statistics, Annals of Probability, and the Zeitschrift für Wahrscheinlichkeitstheorie und verwandte Gebiete.

Throughout his career, Bert also had great interest in problems that could be more easily described to the non-specialist. For example, his foundational work with Donald Berry on one- and two-armed bandits culminated in the comprehensive and often-cited 1985 monograph Bandit Problems: Sequential Allocation of Experiments, written with Berry. Bert especially delighted in problems that involved the interaction between probability theory and other fields, such as combinatorics and game theory. Examples include his 1971 paper with David Heath in Advances in Applied Probability, “Searching for a Particle on the Real Line,” and his 1993 paper for Transactions of the American Mathematical Society, “The Structure of Random Partitions of Large Integers.”

Bert loved to share his extensive knowledge of probability theory with students, both verbally and in writing. The graduate text written with Lawrence Gray, A Modern Approach to Probability Theory, was published in 1997 and is still used. The advanced undergraduate text, Filtering and Prediction: A Primer, written with Naresh Jain and Nicolai Krylov, was published in 2007.

Bert was a thoughtful and successful teacher at the University of Minnesota, and was a recipient of the Morse-Alumni Distinguished Teaching Professor award. Bert taught classes in many different areas other than probability theory, including analysis, geometry, mathematical education, and combinatorics. He was a highly regarded instructor in the University of Minnesota Talented Youth Mathematics Program, and in the National Science Foundation Teacher Renewal Project. Bert was director of undergraduate studies, 1988–90 and coordinator of the Actuarial Science Program, 1982–83 and 1984–86.

Three graduate students completed their PhD under Bert’s direction: Jennie Hansen, John Hoffman, and Mike Weimerskirch. One student praised Bert’s inspiring approach to solving mathematics problems in and outside of class, portraying how mathematics is done, saying it felt like one was “going on a mathematical journey with him”. According to another student, “Bert’s door was always open, and he always had time. We talked often about teaching, from kindergarten on up, and I learned a lot from Bert about various methods to approach certain topics.”

Bert’s activity in education extended to the state and national levels. He played a major role, starting in 2001, in strengthening the K–12 state mathematics standards in Minnesota; in 2003, he served on the Minnesota Commissioner of Education’s committee to revise these standards. Bert was a member of the National Mathematics Advisory Panel reporting to the US Secretary of Education in 2008, which focused on the quality and rigor of national standardized mathematics tests.

On the lighter side, Bert was a prodigious source of baseball lore, a sport he followed closely. He was also an avid bridge, skat, and poker player, and helped develop a system for playing blackjack which he briefly used in Las Vegas. It is less well known that Bert gave up his football scholarship at the University of Minnesota to allow more time for his academic studies.