Institute of Mathematical Statistics
Fostering the development and dissemination of the theory and applications of statistics and probability
Renew / Join IMS
Southeastern Probability Conference
August 31, 2022

Since Rick Durrett moved to Duke, in the summer of 2010, there has been a one-and-a-half day meeting there called the Southeastern Probability Conference, usually held the Monday and Tuesday after graduation and before the start of summer school. The beginning of 2020 brought good news and bad news for the conference. The good news was that we received a grant from NSF to support the meeting for four years and provide support for graduate students and postdocs. You can guess the bad news… The COVID epidemic shut down in-person meetings for two years, although there was a Virtual Conference held May 17–18, 2021, in honor of Elizabeth Meckes. Links to this conference and previous SEPCs can be found at https://services.math.duke.edu/~rtd/.

From May 31–June 1, 2022, there was again an in-person SEPC meeting held at Duke University. The seven invited speakers were Erik Bates (Wisconsin), Juraj Foldes (Virginia), Konstantin Matetski (Columbia), Evita Nestoridi (Princeton), Mariana Olvera-Cravioto (UNC), Shankar Bhamidi (UNC), and Nicholas Cook (Duke). The unusually large number of local speakers was due to the fact that Scott McKinley from Tulane and Marianna Russkihk from MIT became infected with the influenza virus and could not attend. 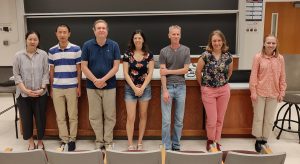 There will again be two meetings held in 2023. The first will be at Duke in the traditional time slot, May 15–16, and a second one will be held August 14–15 at the University of Virginia in Charlottesville and organized by Juraj Foldes, Christian Gromoll, and Tai Melcher. Graduate students and postdocs will have a chance to apply for $500 grants to partially support the cost of their attendance. We hope that moving the venue will spread out the work of running the conference and allow more people to participate in the meeting. Watch the webpage listed above and the IMS Bulletin for more details.