Institute of Mathematical Statistics
Fostering the development and dissemination of the theory and applications of statistics and probability
Renew / Join IMS
Wahba Lecture: Michael Jordan
May 14, 2022 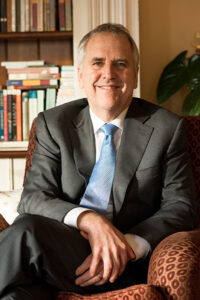 Michael I. Jordan is the Pehong Chen Distinguished Professor in the Department of Electrical Engineering and Computer Science and the Department of Statistics at the University of California, Berkeley. His research interests bridge the computational, statistical, cognitive, biological and social sciences. Prof. Jordan is a member of the National Academy of Sciences, a member of the National Academy of Engineering, a member of the American Academy of Arts and Sciences, and a Foreign Member of the Royal Society. He was a Plenary Lecturer at the International Congress of Mathematicians in 2018. He received the Ulf Grenander Prize from the American Mathematical Society in 2021, the IEEE John von Neumann Medal in 2020, the IJCAI Research Excellence Award in 2016, the David E. Rumelhart Prize in 2015, and the ACM/AAAI Allen Newell Award in 2009. Michael Jordan will give this inaugural Wahba Lecture at the IMS Annual Meeting in London, June 27–30, 2022.

I’m delighted to be presenting the inaugural Grace Wahba Lecture. My lecture will focus on emerging problems at the tripartite interface between statistics, computation, and economics. This is not a new interface — it was a focus of research going back to the 1940s, developed by luminaries such as David Blackwell, John von Neumann, and Ken Arrow — but it has been given new urgency in the modern era as statistical machine learning algorithms have come to play a prominent role in social and personal life, in settings such as commerce, transportation, finance, entertainment, and healthcare. In such settings, data is not merely “collected” and “analyzed”; rather, data emerges from interactions among self-interested agents, analysis occurs in distributed systems, there are information asymmetries and feedback loops, and the design goals for the overall system include notions such as social welfare and computational viability. Thus, loss functions need to refer to not only inferential goals, but also to social and personal concepts such as privacy, fairness, trustworthiness, environmental impact, scarcity of resources, and long-term economic value. Accordingly, ideas from microeconomics — such as incentives, multi-way markets, contracts, equilibria, and mechanism design — are needed to structure the design of inference algorithms. These economic ideas need to be revised and revitalized to incorporate modern statistical and computational methodology, recognizing the omnipresence of fine-grained data in real-world systems, and the opportunities that statistics provides for building economic systems that are adaptive, robust, and scalable.

I’ll discuss several recent projects that illustrate the aforementioned tripartite interface. One project involves strategic classification, where a principal wishes to build a predictive model based on data obtained from strategic agents who have a vested interest in the outcome of the model’s predictions and will alter their data accordingly. I show how different equilibria can arise depending on the relative rates of data collection and model updates. Another project studies matching markets, both with transfers and without, where agents on both sides of the market enter the market without knowing their preferences a priori. They must experiment, managing an exploration/exploitation tradeoff that is implemented via multi-armed bandit algorithms. I discuss how competition affects statistical rates. The analysis yielding these rates arises from a Lyapunov function that brings together statistical and economic considerations. In a third project, I again study a setting in which an economic mechanism is to be designed without prior knowledge of participants’ preferences. Specifically, the goal is to study Myerson auctions that are based on empirical estimates of the values of items in the auction. A key issue in this problem is robustness — we would not want to propose an auction whose outcome is sensitive to possibly adversarial data. I show how a robust empirical Myerson auction can be designed that nearly maximizes revenue, while providing statistical guarantees. Finally, I’ll also discuss the use of contract theory to allow principals to perform statistical inference in the face of information asymmetries. Here contract mechanisms are used to incentivize strategic agents to reveal information that is used for efficient statistical inference.

Throughout this research the goal is to have impact on real-world problems — in domains such as commerce, transportation, finance, entertainment, and healthcare where data and social interactions abound. Driving applications in these settings fundamentally require data analysis and inference, but, critically, there is also a social and economic context. Indeed, in these problems data and inferences flow among strategic agents, thereby accruing economic value, and interacting with strategic considerations. This economic perspective opens up new challenges and opportunities for statistics.