Institute of Mathematical Statistics
Fostering the development and dissemination of the theory and applications of statistics and probability
Renew / Join IMS
Obituary: Ross Leadbetter 1931–2022
May 14, 2022 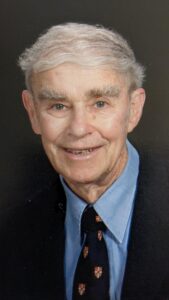 Malcolm Ross Leadbetter died on February 26, 2022, in Chapel Hill, North Carolina. He was 90 years old. During a career that spanned over 50 years, he was a major influence on generations of researchers, as a teacher, mentor, colleague, and friend. He will be dearly missed.

Ross was born on Christmas Eve, 1931. His mother was a teacher and homemaker, and his father was a high-school principal in his native town of Invercargill, New Zealand, and a world-class sprinter. He received an MSc degree (first class hons) in Mathematics from the University of Otago, New Zealand in 1954, a BA (Wrangler) from Cambridge University in 1958, (MA 1963), and his PhD from the University of North Carolina in 1963.

Ross worked for the New Zealand Applied Mathematics Laboratory in 1955–56 and the New Zealand Naval Research Laboratory in 1958–60. His first position in the US was at the Research Triangle Institute in North Carolina during 1961–66, where he worked as a mathematician. Ross was appointed Associate Professor with tenure at the Department of Statistics at the University of North Carolina, Chapel Hill, in 1966, and promoted to Full Professor in 1968. In the 1960s, it was unusual to get tenure at the time of hiring, but a competing offer from Yale prompted the UNC offer.

Throughout his career, Ross provided long-term statistical assistance to the US Environmental Protection Agency regarding environmental legislation, and worked for the US Navy on improving ship safety.

Together with Stamatis Cambanis and Gopinath Kallianpur, Ross ran the Center for Stochastic Processes in the University of North Carolina Statistics Department for more than two decades. The Center had a crucial impact on the careers of very many young researchers, including [co-authors of this obituary] HR who did research there for altogether two and a half years, and TH who wrote his thesis under Ross’ guidance during the early years of the Center.

Ross received numerous accolades that honored his extraordinary achievements. He was a fellow of the ASA and IMS and an elected member of the ISI. He was awarded the 2011 IMS Carver Medal for his contributions to the 1994 Third World Congress at North Carolina, and for his service on the IMS Council and his editorial work. Last but not least, Ross received honorary doctorates from the University of Lund and the University of Lisbon.

Ross’ research work was often guided by his interests in physics, ranging from quantum theory to the differential equations describing sea waves. Undoubtedly, his early experience at the New Zealand Naval Research Laboratory had an influence in that. Ross made central contributions to several areas of statistics, probability, and stochastic processes. In the beginning of the 1960s, together with G. S. Watson, Ross obtained seminal results on density and hazard rate function estimation, and, at the same time, made an excursion into renewal theory. However, his main passion was the extreme value theory for stochastic processes and random fields. Classical extreme value theory focused on independent data. Ross was among the first researchers to consider extremes for dependent sequences and processes. In particular, he developed the mixing theory for extremes of stationary processes, showing that much weaker dependence conditions than Rosenblatt’s strong-mixing condition in central-limit theory was sufficient for studying the asymptotic theory of extreme values. Later, he further characterized the role of local dependence by introducing the notion of “extremal index” to describe the amount of local clustering of extreme values and the resulting change to the asymptotic distribution of maxima. The extremal index has become a fundamental tool in the theory and statistical analysis of extreme values, and the development of novel inference approaches based on the extremal index continue to be an important topic for the research of extremes today. Ross also introduced point processes as a major tool for studying the properties of extremes and along the way he contributed to point process theory itself.

Ross coauthored three books, on stationary processes, with H. Cramér; on extreme values of stationary processes, with G. Lindgren and HR; and on the basic theory of measure and probability with S. Cambanis and V. Pipiras. These books have inspired generations of students and researchers in probability and statistics and continue to be influential. Ross’ writing exemplified excellence in communicating mathematical ideas. His writing is crisp and focused, reflecting his uncanny ability to remove extraneous details and get right to the core of problems. On the other hand, he would always proceed at a comfortable pace and provided ample motivations and explanations so that the reader is not lost in the mathematical abstraction. Most importantly, the clear, simple language that he used eases the anxiety that any reader might have in reading theoretical work.

Ross married Winsome Wallace of Oamaru, New Zealand, in 1955. In an email the day after his death, Winsome wrote, “We have been together for a very long time — 67 years of marriage and 4 years dating before that. It has been a long and wonderful journey together.” They have four children, 10 grandchildren and five great-grandchildren. Ross’ personal interests included playing the Appalachian dulcimer, folk dancing, and collecting antique scales.

After Ross’ passing, we wrote with several of Ross’ acquaintances. Reading their reflections, the first few words that come to mind that best describe Ross are generous, unassuming, and witty. Indeed, Ross was a very special friend who touched our lives and left us with many happy memories.

We miss him very much.

Parts of the material for this obituary were taken from an interview with Ross, by Tailen Hsing and Holger Rootzén, published in 2015 in the journal Extremes: https://link.springer.com/article/10.1007/s10687-015-0225-1