Institute of Mathematical Statistics
Fostering the development and dissemination of the theory and applications of statistics and probability
Renew / Join IMS
Medallion Lecture: Rodrigo Bañuelos
May 14, 2022 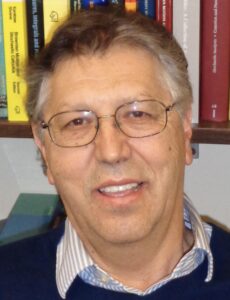 Rodrigo Bañuelos received his PhD from UCLA and after postdoctoral positions at Caltech and the University of Illinois, he moved to Purdue University, where he served a four-year term as Head of the Mathematics Department. His research interests are in probability and applications to harmonic analysis and spectral theory with emphasis on singular integrals and the geometry of the Laplacian and non-local operators. He has written and lectured widely on these topics.

Bañuelos has served on many editorial boards and scientific committees, including the Annals of Probability, Transactions and Memoirs of the AMS, Revista Matemática Iberoamericana, the United States National Committee for Mathematics, Berkeley’s MSRI Scientific Advisory Council, and UCLA’s IPAM Board of Trustees. He is a Fellow of the AMS, a Fellow of the IMS, and a Fellow of the Association for Women in Mathematics (AWM). He is the recipient of the 2022 AMS Award for Distinguished Public Service.

Rodrigo Bañuelos will deliver this Medallion lecture at the IMS Annual Meeting in London, June 27–30.

In 1979, R. F. Gundy and N. Th. Varopoulos published a beautiful three-page paper titled “Les transformations de Riesz et les intégrales stochastiques,” in which they gave a representation for the Riesz transforms on ℝd as conditional expectations of stochastic integrals. During the last 40-plus years, in combination with sharp martingale inequalities, this simple and elegant representation has been a phenomenal success in obtaining optimal, or near optimal, Lp bounds for Riesz transforms and more general singular integrals and Fourier multipliers in a variety of geometric and analytic settings. An important feature of the type of bounds obtained by this method is their independence on the geometry of the ambient space. There is now a vast literature on this topic with contributions by many authors.

The discrete Hilbert transform was introduced by David Hilbert in 1909, who proved its boundedness on $\ell^2$. A long-standing open problem that has resisted the Gundy–Varopoulos approach (as well as all others) concerns the sharp $\ell^p$ norm, $p\in (1, \infty)$, of this operator and its higher-dimensional versions (the discrete Riesz transforms) as defined by A. P. Calderón and A. Zygmund in their seminal 1952 paper on singular integrals. For general $p\in (1, \infty)$, the boundedness of the continuous Hilbert transform and the discrete Hilbert transform on $L^p$ and $\ell^p$, respectively, was first obtained by M. Riesz (1925).

In this talk the speaker will describe a modification of the Gundy–Varopoulos method that leads to sharp $\ell^p$ inequalities for a collection of discrete operators on $\mathbb{Z}^d$, $d\geq 1$. When $d=1$, after convolution with a probability kernel, the construction leads to the discrete Hilbert transform. This case shows that the classical Hilbert transform on $\mathbb{R}$, whose norm was found by S. Pichoridis in 1972, and the discrete Hilbert transform on $\mathbb{Z}$ have the same p norms. This had been a long-standing conjecture initiated in part by an erroneous proof of E. C. Titchmarsh in 1926.

For $d>1$, the discrete operators have the same norms on $\ell^p(Z^d)$ as the classical Riesz transforms on $L^p(\mathbb{R}^d)$. These norms are in fact equal to the Pichoridis constants for the norm of the classical Hilbert transform, hence independent of $d$.