Institute of Mathematical Statistics
Fostering the development and dissemination of the theory and applications of statistics and probability
Renew / Join IMS
Obituary: Yuan Shih Chow 1924–2022
April 1, 2022 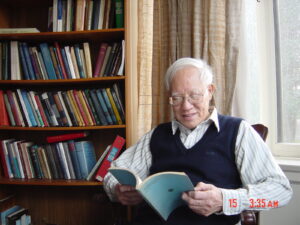 Yuan Shih Chow, Professor Emeritus of Statistics at Columbia University, passed away on March 3, 2022 in his hometown in Hubei, China. He suffered a stroke earlier and never recovered. He was 97 years old. He is survived by three daughters, Letitia, Eunice and Grace, two sons, Patrick and Nelson, seven grand children and four great-grand children.

Y.S. Chow was born on September 1, 1924, in Hubei province in China. As the eldest child of a local leader, he grew up in war and turmoil. His hometown was on the front line during most of the Japanese invasion and occupation of China. When he was 16, he journeyed, mostly on foot, to Chongqing (Chung-King), the wartime Chinese capital, to finish his high school education. He entered Zhejiang University (then known as National Che Kiang University) in 1944 as a freshman majoring mathematics. In early 1949, after graduating from college, he took a teaching position with Department of Mathematics at the National Taiwan University (NTU) in Taipei. He left NTU in 1954 to pursue a PhD in mathematics with a full scholarship from the University of Illinois at Urbana-Champaign (UIUC). There, he completed his PhD thesis in 1958 on martingale theory under the supervision of J.L. Doob. After a one-year postdoctoral research under A.H. Taub in aerodynamics at UIUC, he joined the IBM Watson Lab, then a joint venture between IBM and Columbia University, as a member of research staff. He started teaching as an adjunct faculty member for Department of Mathematical Statistics at Columbia University. He left Watson Lab in 1961 to become a full time faculty at Columbia. He joined Purdue University in 1962 as Associate Professor of Mathematics and Statistics and was promoted to full professor in 1965. He returned to Columbia University in 1968 and stayed until his retirement in 1993. At different times, he was a visiting professor at the University of California at Berkeley, University of Heidelberg, Germany and the National Central University, Taiwan. He served as Director of the Institute of Mathematics at Academia Sinica, Taiwan and Director of the Center of Applied Statistics at Nankai University, Tianjin.

Y.S. Chow was an influential and prominent scholar in probability theory and statistics. His books include Great Expectations: The Theory of Optimal Stopping (1971), co-authored with Herbert Robbins and David Siegmund, Probability Theory (1978) co-authored with Henry Teicher, and Topics on Random Walks (1995). His works in martingale theory have been widely recognized and used in statistics and related disciplines. The Hájek–Rényi–Chow inequality, an important extension of Kolmogorov’s maximum inequality on sums of independent variables and Doob’s maximum inequality on martingales, can be used to provide a direct proof of the strong law of large numbers, bypassing the Kronecker lemma. In the theory of martingale convergence on directed/partially ordered sets, the Vitali–Chow criterion unified the classical Lebesgue and Ward’s differential calculus under a martingale structure. His work on martingale local convergence provided a highly useful tool in sequential analysis, time series analysis, adaptive control and optimization and analysis of machine learning algorithms. In a series of papers in the 1960s, Y.S. Chow and Herbert Robbins jointly laid the mathematical foundation for the theory of optimal stopping and set the stage for the further development of the subject. In sequential estimation, Chow and Robbins, in a landmark paper (Chow and Robbins, 1965), developed a construction of fixed-width confidence intervals for a Gaussian mean without knowing the variance, and later on Chow and his students developed sophisticated theory on the boundedness of the regret in such problems.

After his retirement from Columbia University, Y.S. Chow devoted much of his energy towards philanthropic activities. With his own money, he established two college educational funds in his hometown: one for high-achieving students and the other for economically disadvantaged students. He also funded a high school mathematics competition in his hometown which is known as the Yuan Shih Chow Mathematics Competition Prize.

For additional stories about Y.S. Chow, see this interview in Statistical Science (Ying and Zhang, 2006).