Institute of Mathematical Statistics
Fostering the development and dissemination of the theory and applications of statistics and probability
Renew / Join IMS
Carver Award winner Xuming He
April 1, 2022 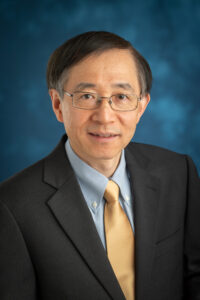 We are pleased to announce that Xuming He is the 2022 IMS Carver Medal recipient. Xuming He is the H.C. Carver Collegiate Professor of Statistics at the University of Michigan, and President-Elect (2021–2023) of the International Statistical Institute (ISI). He was selected for the Carver Medal, an award for service to the IMS, for “his decades-long contributions to the IMS in multiple capacities, including Editor of the IMS Bulletin, IMS Council member, Committee Chairs, and conference program co-chairs; and for his strong and conscientious leadership in a wide range of other professional services.”

Xuming He earned his PhD in statistics (1989) from the University of Illinois at Urbana-Champaign. He has made fundamental research contributions to statistics in the areas of quantile regression, semi-parametric and nonparametric models, robust statistics, asymptotic theory, data depth, subgroup analysis, data-adaptive inference, resampling methods, and statistical applications to concussion research, climate studies, bioinformatics, and educational testing. He has published over 160 papers in leading international journals. He has mentored and graduated more than 30 PhD students, who have taken positions in academia and various industry sectors worldwide.

Xuming has received numerous awards, including the Founders Award from the American Statistical Association (ASA, 2021), Distinguished Faculty Achievement Award from the University of Michigan (2021), International Chinese Statistical Association Distinguished Achievement Award (2015), ISI Service Award (2013), and IMS Medallion Lecture (2007), among many others. He is an elected member of ISI, and a Fellow of IMS, ASA, and the American Association for the Advancement of Science (AAAS). Xuming has made exceptional contributions to the statistical community, including serving as the co-editor of JASA Theory & Methods (2012–14), Chair of the Program Committee for the 59th ISI World Statistics Congress (2013), Chair of the ASA Committee on Meetings (2012–16), 2010 JSM Program Chair, and Program Director of Statistics at the US National Science Foundation (2003–05).

On receiving the news of his award, Xuming said, “As a lifetime member of the IMS, I really appreciate the opportunities that I have to work with so many of my colleagues from around the world to serve the IMS and our profession. I believe that if everyone gives a little bit of their time to the common good we can achieve a lot. The Carver Medal is especially dear to my heart; Harry Carver was an influential mathematical statistician in Michigan and I am really humbled by the honor.”

The Carver Medal was created by the IMS in honor of Harry C. Carver, Founding Editor of the Annals of Mathematical Statistics and one of the founders of the IMS. The medal will be awarded to Xuming He at the 2023 JSM in Toronto.