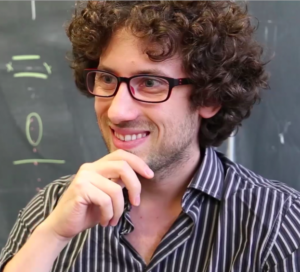 Hugo Duminil-Copin is a probabilist and a mathematical physicist. He works on statistical mechanics models such as percolation, the Ising model, the Potts model, random walks in random environments, random height functions. His research has made contributions to percolation theory, a branch of probability theory that is concerned with the behavior of connected clusters in random graphs. His research also has an impact on mathematical physics, complex analysis, and combinatorics. In addition, he makes significant contributions to statistical physics. Duminil-Copin has received a number of awards, including the European Mathematical Society prize in 2016 and the Loève prize in 2017.

A great achievement of physics in the second half of the twentieth century has been the prediction of conformal symmetry of the scaling limit of critical statistical physics systems. Around the turn of the millennium, the mathematical understanding of this fact progressed tremendously in two dimensions with the introduction of the Schramm–Loewner Evolution and the proofs of conformal invariance of the Ising model and dimers. Nevertheless, the understanding is still restricted to very specific models.

In this talk, we will gently introduce the notion of conformal invariance of lattice systems by taking the example of percolation models. Percolation models are models of random subgraphs of a given lattice. They have a rich history and lie at the crossroad of several families of lattice models, in particular in two dimensions. In recent years, the understanding of their critical behaviour progressed greatly in the planar case.

This is based on joint work with Karol Kozlowski, Dmitry Krachun, Ioan Manolescu, and Mendes Oulamara.