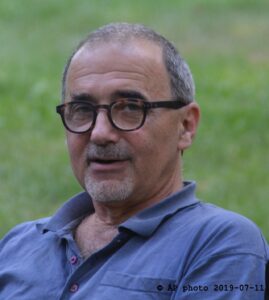 Bálint Tóth is Professor (Heilbronn Chair) of Probability at the University of Bristol, UK, and research professor at the Rényi Institute of Mathematics Budapest, Hungary. He has worked on microscopic physical models of Brownian motion, quantum spin systems, limit theorems for random walks with long memory, and non-conventional stochastic processes, hydrodynamic limits, etc. In particular, he contributed to the theory of self-interacting motions, that is, motions that are “reinforced”, “self-avoiding” or “self-repellent”. In collaboration with Wendelin Werner he constructed the random geometric object later called the Brownian Web.

Bálint was an invited speaker of the International Congress of Mathematicians ICM-2018 (Rio de Janeiro), and of the European Congress of Mathematics ECM-2000 (Barcelona). He was plenary speaker at two Conferences on Stochastic Processes and their Applications SPA-2005 (Santa Barbara) and SPA-2014 (Buenos Aires). He is a member of Academia Europaea. Bálint served the probability community as Editor-in-Chief of the journals Electronic Journal of Probability (2009–11) and the Annals of Applied Probability (2016–18). Currently he is co-Editor-in-Chief of Probability Theory and Related Fields.

Bálint Tóth’s Medallion Lecture will be given at SPA 2022 in Wuhan.

Understanding the diffusive behaviour of particles suspended in a gas or fluid in thermal equilibrium is a major challenge of mathematically rigorous statistical physics, dating back to the ground-breaking works of Einstein, Smoluchowski, Langevin and other classics. In 1905 Hendrik Lorentz proposed a very simple looking model for study which turned out to be rather difficult to rigorously understand and still keeps us busy. Since the early times the model has been known under the name of Lorentz gas. The randomised version is the following: place spherical balls of small, fixed radius and infinite mass centred on the points of a Poisson point process of some fixed intensity in d-dimensional Euclidean space, where d=2 or d=3. Assume that the density of scatterers is sufficiently small so that with positive probability there is free passage out to infinity. Now, consider the trajectory of a point particle starting with randomly oriented unit velocity, performing free flight in the complement of the scatterers, and scattering elastically on them. This trajectory will be a stochastic process with randomness coming from the random placement of the fixed scatterers and the random initial velocity. Once these are fixed, otherwise, the motion is Newtonian, deterministic.

A major problem in mathematical statistical physics is to understand the diffusive scaling limit of this particle trajectory. Indeed, the Holy Grail of this field of research would be to prove the invariance principle (i.e., weak convergence to a Wiener process with non-degenerate variance) for the sequence of trajectories under diffusive scaling. This is too hard. An intermediate scaling regime is the so-called Boltzmann-Grad limit, when the scatterer density increases to infinity and scatterer radius decreases to zero so that the typical free flight between two successive scattering events stays of order 1. Classical results of Gallavotti (1970) and Spohn (1980) prove that in this limit the trajectory converges to a Markovian flight process (essentially a random walk), which, due to Donsker’s theorem, under a second diffusive limit indeed converges to Wiener process. In a recent work (joint with C. Lutsko) we obtained new results interpolating between Gallavotti–Spohn and the Holy Grail which is still beyond reach. The method relies on a subtle probabilistic coupling between the physical Lorentz process and its Markovian approximation. I will present annealed and semi-quenched versions of this type of theorem, also extended to other similar models. Later in the lecture I will switch to another related problem: the weak coupling limit of Lorentz gas with smooth (rather than hard core) potential. Here, in the limit the interaction potential is scaled down while the relative density of scatterers is kept constant. The kinetic limit (somewhat analogous to Gallavotti–Spohn in the previous case) was obtained by Kesten and Papanicolaou in 1981, and a limit partially interpolating between Kesten–Papanicolaou, and the Holy Grail was proved by Komorowski and Ryzhik in 2006. Our coupling method seems to deliver a substantial improvement in this direction, too. This is still work in progress.