Institute of Mathematical Statistics
Fostering the development and dissemination of the theory and applications of statistics and probability
Renew / Join IMS
Obituary: Kjell A. Doksum 1940–2021
February 16, 2022 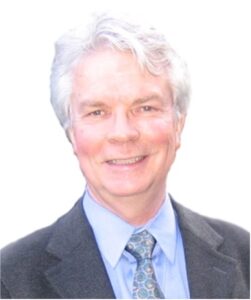 Kjell Doksum, IMS Fellow, died on November 20, 2021 at the age of 81. He was Professor Emeritus of Statistics at the University of California, Berkeley, and Senior Scientist in the Statistics Department at University of Wisconsin–Madison.

Kjell was born in Sandefjord, Norway, and grew up in Oslo. His parents were Filip Doksum and Elise Olsen, and he had two brothers. He was married to Joan Fujimura, a distinguished scholar in Sociology of Science, and had three daughters: Teresa, Kathryn, and Margrete.

Kjell’s early and lifelong passion was soccer (or football). He grew up near Bislett Stadium and started playing in the streets of Oslo. Alas, his skills on the cobblestones did not translate to the pitch, and his hopes of becoming a professional player were dashed. Nevertheless, he remained an avid soccer fan and played recreational soccer well into his 60s. Generations of students, faculty, and visitors at Berkeley, Madison, and elsewhere will fondly recall the practices, games, and parties he organized. It was during one of the soccer parties that I asked him if I could work with him on my dissertation. Not being a man of many words, Kjell just said “Sure”. He became not only my advisor, but lifelong mentor and close friend.

Another potential career that didn’t work out was fishing. After high school, he moved to San Diego in 1959 to join his aunt and uncle. Many of his relatives were fishermen, so he tried it out for two weeks. After getting seasick from the huge waves during a storm, he decided that going to San Diego State College was a smarter and safer option. The fishing industry’s loss was a huge gain for Statistics.

Kjell received his Master’s degree in Statistics from San Diego State College in 1962, where he worked with Chuck Bell, one of the few African-American statisticians at the time. He then moved to University of California, Berkeley, where he completed his PhD in 1965 under the supervision of Erich Lehmann. After a year as a postdoc in Paris, he joined the Berkeley Statistics department where he spent most of his academic career. He took an early retirement in 2002 and moved to the University of Wisconsin, Madison, together with his wife Joan, who was recruited by the Department of Sociology. He retired from Wisconsin in 2010 and remained there as a Senior Scientist. He held visiting positions at the University of Paris, University of Oslo, the Norwegian Institute of Technology in Trondheim, Harvard University, Columbia University, Bank of Japan, Hitotsubashi University in Tokyo, and Stanford.

Kjell made pioneering contributions to statistical theory and methodology, covering a wide range of areas: randomization methods, nonparametric and rank-based inference, survival and reliability analysis, semiparametric techniques, transformation models, probability measures, and Bayesian inference. In early collaboration with Chuck Bell, he developed a randomization procedure and showed that the resulting Gaussian randomized tests were asymptotically more powerful in non-normal situations than the classical ones. He returned to this topic later when he proposed a Monte Carlo approach for partial likelihood inference for semiparametric models. In the early 1970’s, Kjell introduced the shift function as a nonparametric functional measure of difference between distribution functions and, in a series of subsequent papers, developed inference procedures. In fact, he was still working with a student on extending this approach to regression settings at the time of his death.

In one of his most cited papers, Kjell proposed the well-known “neutral-to-the-right” processes and developed their properties. These processes are very useful in nonparametric Bayesian inference. Kjell’s joint work with Peter Bickel provided deep insights into statistical properties of procedures based on transformed data. In joint work with Steinar Bjerve and others, he introduced the concept of local correlation in nonparametric regression framework. He proposed, jointly with Hoyland, a new class of degradation models for reliability and life testing. He and his co-authors also made many important contributions to survival and censored data analysis. The Festschrift volume organized for his 65th birthday, Advances in Statistical Modeling and Inference: Essays in Honor of Kjell A. Doksum (2006), edited by V. Nair, covered contemporary results on all these research areas.

Many graduate students at Berkeley and elsewhere learned their statistics theory and methods from Kjell’s book, co-authored with Peter Bickel, Mathematical Statistics: Basic Concepts and Selected Topics, Volumes I and II, CRC Press. I fondly remember the early edition (called the Red Book by students), all the more because of the many errors that we had to work through! It made our learning more robust.

Kjell supervised 24 PhD students as well as several undergraduates, and quite a few returned to pursue successful careers in their home countries. He served on the editorial boards of JASA, Scandinavian Journal of Statistics, Life Data Analysis, and Sankhya. He was Executive Secretary of IMS and played a key role in the founding of the IMS journal Statistical Science. He was recognized for his contributions by being elected a Fellow of ASA and IMS, an elected member of ISI, and a foreign member of the Royal Norwegian Society of Sciences and Letters.

Kjell was a kind, gentle, and soft-spoken person. He always had a sweet smile on his face, a great sense of humor, and time for everyone. He rarely talked about himself, except to Joan who used her ethnographic interviewing skills to get him to talk about his childhood and his views on all things political. Kjell was fierce advocate for social justice. He had developed an integrity and a moral strength that carried him through many adversities, beginning with his mother’s early death and the Nazi occupation of Oslo during his early childhood. 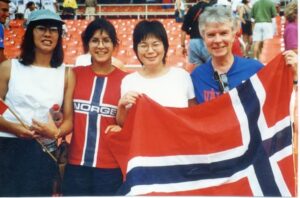 Kjell (right) celebrating his beloved football at the Olympics Soccer game between Norway and Brazil in 1996, with (left to right) his daughters Kathryn and Teresa, and his wife Joan.

Kjell leaves behind a loving family: wife Joan, daughters Teresa and Kathryn, grandchildren Matthew, Kevin, Emma, and Calvin, nephews and cousins in Norway, sister-in-law in Denmark, and Joan’s mother, brothers, their families, and cousins in Hawaii who all adopted Kjell as one of their own. He is dearly missed by all of them as well as his many friends and former students.