Institute of Mathematical Statistics
Fostering the development and dissemination of the theory and applications of statistics and probability
Renew / Join IMS
Obituary: Constance van Eeden 1927–2021
February 16, 2022 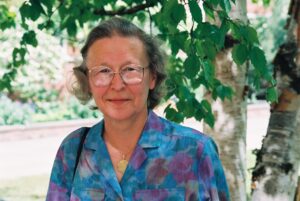 On September 21, 2021, mathematical statistics lost an emblematic figure, Constance van Eeden. Constance, an IMS (and ASA) Fellow since 1973, made an enormous contribution to statistical science as an educator and researcher, through a very active career that spanned more than half a century.

Constance was born in Delft, The Netherlands, on April 6, 1927, and the family spent the trying war years in Bergen op Zoom.

In 1960, Hermann Rubin invited Constance to Michigan State University, where she met her husband, the gifted statistician Charles Kraft. After a short stay at the University of Minnesota, in 1965 van Eeden and Kraft were invited to join Université de Montréal faculty. The arrival of Kraft and van Eeden gave a big impetus to scientific statistics in Québec. Sadly, Charles passed away in 1985.

Constance’s research career spanned over 50 years, the years after retirement being as active as those before. She contributed more than 70 peer-reviewed papers and two books, many of the papers being written with her principal collaborators, Charles Kraft and Jim Zidek.

Her earliest contribution, in the 1950s, reveals her great intellectual courage, mathematical skill, and originality. She was always well ahead of her time. Even in her PhD thesis she proposed a whole new subarea of statistical science, namely, inference for restricted parameter spaces. (Dan Brunk proposed the same thing independently at about the same time.) The importance of the field cannot be overestimated as statistical procedures that exploit parameter restrictions can achieve huge improvements in performance over those that do not. That work culminated in 2006 with her publication of a Springer monograph on estimation in restricted-parameter space.

In another direction, Constance produced pioneering work in nonparametric statistical inference that is quoted in the Hájek–Šidák classic book on rank tests. Jointly with Charles Kraft, she wrote other seminal papers in the field that were published in first-class journals, like the Annals of (Mathematical) Statistics and JASA. For many years, “Kraft and van Eeden” were household names in that discipline, and in 1968 they published a highly innovative book on that subject. Moreover, as many of her students worked in nonparametric statistics she is the founder of the Québec school of nonparametrics.

As for her contributions in other fields, we mention her long-term collaboration with Jim Zidek that stemmed initially from his work on group Bayesian theory. Their first paper showed how Wald’s classical theory found new applications there, where the hyperparameters assumed the role formerly played by parameters and restrictions were thus inevitable. But good collaborations take on a life of their own and this one was no exception. It moved through such things as weighted likelihood estimation, and in a totally new direction, Bayesian subset selection.

All of her collaborators appreciated her extremely high standards, her keen sense of precision and originality, and her love of the discipline. Importantly, she would never rush into publishing: drafts of her papers had to sit in a drawer for a while.

The editor and educator

Constance’s sharpness as a reviewer was proverbial. That sharpness combined with her high standards led to associate editorships in: the Annals of Statistics (1974–1977), the Canadian Journal of Statistics (1980–1994), the Annales des Sciences Mathématiques du Québec (1986–1998). Perhaps her most significant editorial contributions stemmed from her Editorship of the ISI’s abstracting journal (1994–2004), rewarded in 1999 with the Henri Willem Methorst Medal.

Constance was also a great educator and an exemplary and quite unique advisor and mentor (14 PhD and 19 MSc), who instilled in her students her professionalism and sense of rigor. During her 75th birthday fest, in May 2002, there were numerous references to the generosity and patience of “Madame van Eeden”.

Constance chose to retire in 1988 and became Professeur Émérite at Université de Montréal. Besides, 1989 marked the beginning of her long-term multifaceted involvement with UBC, as Honorary Professor of Statistics for more than 20 years.

Her extraordinary career was rewarded by numerous honours, the most salient one being an SSC Gold Medal (1990). In 2003, the IMS published a Festschrift volume in her honour. At the time of her passing, she was an honorary member of both the Canadian and the Dutch statistical societies, and an elected member of the ISI. Université de Montréal established, in 1998, the ‘‘Prix Constance van Eeden’’ to be awarded to the best BSc graduate in statistics.

Constance was always full of praise for the younger lot: junior faculty and students, her daughter Kari, her stepchildren. She viewed herself as a problem solver; her favorite pastimes were crossword puzzles and knitting. Her personality is epitomized by the village of her retirement: close to busy Amsterdam, Broek in Waterland lives at a slower pace, surrounded by green pastures.