Institute of Mathematical Statistics
Fostering the development and dissemination of the theory and applications of statistics and probability
Renew / Join IMS
Obituary: Theophilos Cacoullos 1932–2020
November 16, 2021 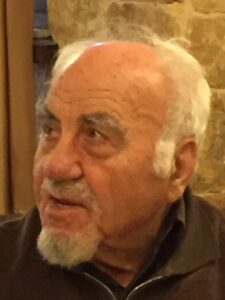 Theophilos N. Cacoullos was born April 5, 1932, in the village of Pachna in Limassol district, Cyprus. After his secondary education in Limassol (valedictorian, 1950), he studied mathematics at the University of Athens and earned his diploma (BSc) in 1954. Then, Cacoullos returned to Cyprus and worked for two years as a mathematics teacher at his alma mater high school. In 1957, he went to the US on a scholarship from the Greek Scholarships Foundation for postgraduate study. He earned his MA in 1960, and then his PhD in 1962, in mathematical statistics from Columbia University.

Cacoullos’s master’s thesis, with Alan Birnbaum, on median unbiased estimation prompted his paper, “Combinatorial Derivation of the Distribution of the Truncated Poisson Sufficient Statistic,” published in the Annals of Mathematical Statistics. In 1989, Cacoullos characterized normality under spherical symmetry by the admissibility of Fisher’s linear discriminant function in a paper in Statistics and Probability Letters. He established that, within the family of spherical normal scale mixtures, the normal maximizes the minimax probability of correct classification, provided the Mahalanobis distance between the two populations is the same.

In the early 1960s, Cacoullos worked as a research associate at Stanford University. There, he developed ties with Herman Chernoff, Ingram Olkin, and Charles Stein, among others. He worked with Olkin, producing their joint 1965 Biometrika paper on the bias of functions of the characteristic roots of a random matrix.

In May 1962, Cacoullos returned to Cyprus, accepting the position of the director of the department of statistics and research of the new independent Republic of Cyprus. To pursue an academic career, however, he returned to the US, accepting an assistant professorship at the University of Minnesota. During his 15 months back in Cyprus, he prepared his 1966 paper on nonparametric multivariate density estimation. In Minneapolis, he worked on characterizations of normality by constant regression of quadratic and linear forms. During the same period, he discovered the interesting relation between the t and F distributions, published in JASA in 1965, and also exploited in relation to homoscedasticity tests for a bivariate normal.

Cacoullos’s interest in characterizations was renewed in the 1980s with characterizations of mixtures and priors by posterior expectations. With H. Papageorgiou, a fresh PhD at the time, Cacoullos coauthored several articles characterizing discrete distributions by a conditional and a regression function.

Cacoullos visited McGill University in 1972–73 and 1975–76, always enjoying the collaboration and friendship of H. Ruben. In the fall of 1983, he gave a series of special lectures at the MIT Statistics Center at Chernoff’s invitation. He visited the Center for Multivariate Analysis under the directorship of C.R. Rao, then at the University of Pittsburgh, in the spring of 1989.

Cacoullos published more than 70 papers in international journals. Latterly, he became interested in the nature and history of probability and statistics. He published seven textbooks on probability and statistics in Greek and edited Discriminant Analysis and Applications (Academic Press, 1973). In 1989, Springer published his book Exercises in Probability. His recent contributions on Chernoff-type and Cacoullos-type variance generated much interest and produced a variety of publications.

This obituary, by Charalambos A. Charalambides and Narayanaswamy (Bala) Balakrishnan was first printed in the June 2020 Amstat News. Balakrishnan is delivering the inaugural Theo Cacoullos Memorial Lecture next year: see page 3 of the December 2021 issue.