Institute of Mathematical Statistics
Fostering the development and dissemination of the theory and applications of statistics and probability
Renew / Join IMS
Fin-de-pandemic Math Education Miscellanea
November 16, 2021

Pandemics, we learn by studying a bit of history, have been game changers. For example, H.G. Wells wrote in A Short History of the World in 1922:

“In the second century A.D. a great misfortune came upon the Roman and Chinese empires that probably weakened the resistance of both to barbarian pressure. This was a pestilence of unexampled virulence. It raged for eleven years in China and disorganized the social framework profoundly. The Han dynasty fell, and a new age of division and confusion began from which China did not fairly recover until the seventh century A.D. with the coming of the great Tang dynasty.”

But do we ever learn from history that nothing can be taken for granted? The difference between global diseases of the past and present is that we now have the ability to rapidly deploy vaccinations (to those who do not object to them for political or religious reasons) that can limit the symptoms and rate of spread. And so I can be mildly optimistic. There are, however, many things that have changed, for the good or the bad, and some changes are probably permanent. We’ve all learned lessons and seen that we can always extract something valuable even from seemingly dismal situations. (I refer to the column by Daniela Witten in the previous issue. Well said.)

I seem to have an obsession with mathematical education, if previous articles in this column are anything to go by, and that’s probably due to my insistence that learning how to think mathematically helps solidify one’s intuition in a particular field, e.g. statistics.

Let me look at some of the good and bad things that are coming out of educational practices during the pandemic:

A sample of the Good: 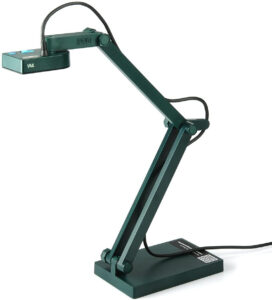 Online lecturing via, e.g., Zoom, is not all that bad, especially when the class size is manageable, with one proviso: that attendees understand that they have to attend and participate (many students do not bother to watch pre-recorded lectures). At the beginning of the pandemic, I made the quick decision not to accept a £1200 tablet offered to every faculty member of my university but instead asked for a £200 doc-cam [like the one in the photo] that could transmit crisp images of my handwriting. And it worked miracles. Many of my colleagues complained about the clumsy tablet but neither I nor my students had anything to complain about seeing math being developed in real time by my £1 6B pencil, a big eraser, a sharpener and various colored pens. I recommend this to anyone unreservedly. It’s the best substitute for lecturing in front of a board, and in some senses better, because students could take images of every single page.

Global seminars/conferences. I enjoyed these a lot. What a great two years it’s been, having the opportunity to attend all kinds of talks, from Australia and Japan to Europe and the US, while sitting at home. I know, many people say that the coffee break is the most important part of a workshop — and I agree — but we don’t have to have everything either online or in person. Some seminars and workshops could be both, and this would reduce unnecessary long and painful flights. And it’ll be good for Gaia too.

A sample of the Bad:

The university student experience. Being a (beginning) student during a time where the university has gone entirely online has been a disaster from the student’s point of view. I don’t think I will elaborate on this as it’s clear that universities are more than the sum of their online courses. I sincerely hope that this is not an irreversible trend.

I’m not the only one who’s been asking questions about the state of mathematical (theoretical, applied, statistical and what-have-you) education. Anirban DasGupta asked quite a few in https://imstat.org/2021/07/17/anirbans-angle-more-questions-than-answers/ His asking, reflects that education is, indeed, in decline—the other pandemic as I have mentioned before in this column. I feel obliged to answer just two (for lack of space) of Anirban’s questions:

Q1. Should statistics students learn math? Well, my answer is yes, of course, just like everyone else (especially when stat departments are within mathematics units). But it’s not what they should learn but how they learn it — and also, that they should learn how to think. Indeed, why should a university student learn linear algebra as a collection of recipes? Why should we strive to teach as much as possible, while ignoring that a most important outcome of mathematical education is the ability to think independently?

Q9. Should students see proofs? This question astonishes me (but I know why it’s being asked). Let me rephrase: is it possible to learn anything at all without learning why it is true? I don’t care if you call it a formal proof or an explanation, but I demand that no student should take anything for granted without any understanding. Take, for instance, the “law” of large numbers. I find it distressing when some think it’s an experimental result, others think it’s a law of nature and many do not understand that it’s something we can understand without experiment and without observing nature. It took some time for humans to develop the right mathematical tools to prove such theorems; tools that can be used to predict more results including many that can be useful in practice. Oh yes, talking about pandemics and epidemics, how can one be sure that their Markovian model is, in the limit, a manifestation of more classical deterministic ones, without understanding the law of large numbers?