Institute of Mathematical Statistics
Fostering the development and dissemination of the theory and applications of statistics and probability
Renew / Join IMS
Obituary: Leo Goodman 1928–2020
March 29, 2021 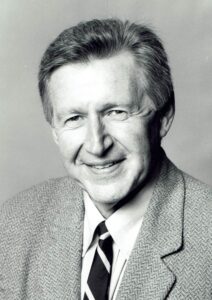 Leo Goodman, one of the towering figures in statistics, and particularly in its application to sociology, died on December 22, 2020, in Berkeley, California, at the age of 92.

Leo was born in Brooklyn in 1928. He obtained a BA in mathematics and sociology in 1948 from Syracuse University, where the great European mathematicians, Charles (Karl) Loewner and Lipman Bers, were then teaching. At the urging of Bers and others, Leo went on to graduate study in mathematics at Princeton, rather than in sociology at the University of Chicago. He obtained his PhD under the supervision of S.S. Wilks and J.W. Tukey in 1950.

He was then appointed as Assistant Professor of Sociology and Statistics at the University of Chicago. He progressed through the ranks at Chicago and remained there, except for sabbaticals and leaves until 1986, when, after a stay at the Stanford Center for Advanced Study in the Behavioral Sciences, he moved to the University of California at Berkeley as Professor of Statistics and Sociology.

Among many honors, he was elected in the 1970s as a member of the National Academy of Sciences, the American Academy of Arts and Sciences, and the American Philosophical Society, and received honorary Doctorates from the Universities of Syracuse and Michigan.

Goodman’s major contributions to statistics were in discrete data analysis. A series of papers, joint with William Kruskal, on measures of association in contingency tables, published in JASA between 1954 and 1963, were early successes. This work had a major impact, particularly in the social sciences, and the measures unified models and concepts touched on by Fisher, Yule, and Pearson. He returned to this area many times in articles in JASA, Biometrika, JRSS and the Annals of Statistics, and in journals and books in several fields of application, including the American Journal of Sociology, the Annals of Human Genetics, Econometrica and others.

Overviews and novel results in this area appeared in papers based on his Fisher Lecture in 1968 and his Rietz Lecture in 1985. Although loglinear models were introduced by Birch, Leo developed the ideas greatly in his Fisher lecture and in a 1970 JASA paper on the multivariate analysis of qualitative data. Loglinear models, as we know, generalized to Generalized Linear Models and then to Generalized Additive Models and have remained important tools of statistics. A paper written with T.W. Anderson, which appeared in 1957, was one of the foundational papers on inference in Markov Chains. Other work included a forerunner of the EM algorithm in a 1974 paper in Biometrika.

A view of Goodman’s great impact on many fields may be gleaned from an interview by Mark Becker in Statistical Science in 2009 and from his obituary in the New York Times on February 18, 2021.

In addition to his talents as a scientist, Leo was a delightful man with an optimistic view of life. The Becker interview passes at length through his rich life and experiences and, along the way, reveals his talents as a raconteur. An example not mentioned in that paper is his story of an experience as a Fellow of Clare College, Cambridge, when he visited as a Guggenheim Fellow in 1957. He was not familiar with college practices and had found a new interest in horseback riding. Not realizing that dinner that night was formal, he arrived in his riding clothes. He found himself meeting the Master of the college and a distinguished guest, formally dressed. He was rescued by the Master, who introduced him to the guest and mentioned that Leo had just arrived from the United States and that his baggage had not yet arrived. Many younger colleagues, including myself and my wife Nancy, felt fortunate to know him. We will miss him.

Written by Peter Bickel, Professor Emeritus and Professor of the Graduate School, University of California, Berkeley