Institute of Mathematical Statistics
Fostering the development and dissemination of the theory and applications of statistics and probability
Renew / Join IMS
Obituary: Donald A.S. Fraser 1925–2020
March 29, 2021 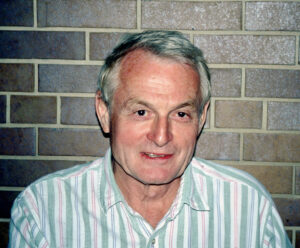 On December 21, 2020, Canada and the world lost one of their most eminent and influential statisticians, Donald Alexander Stuart Fraser, OC, FRSC, who passed away at the age of 95. By his side was his wife Nancy Reid, herself a distinguished statistician.

Don’s exceptional path as a scientist, which spanned over 70 years, was characterized by creative thinking, deep intuition, and a singular passion for statistics. As the author of over 280 articles, two research monographs and three widely used textbooks which were the first exposure to the subject for generations of students in the 1950s, 60s and 70s, he had a profound and lasting influence on the advancement of the field in Canada and internationally.

Based at the University of Toronto throughout his career, which began in 1949, Don was for decades the foremost intellectual leader of the discipline in Canada. He schooled many generations of statisticians and data scientists, supervising 55 PhD students. He played a key role in the establishment of his university’s Department of Statistical Sciences, serving as its first chairman from 1977 to 1983. His stature attracted talent and helped the University of Toronto to become the center of excellence in statistics which it remains to this day. He was also involved in the creation of a national statistical association and brought prestige to The Canadian Journal of Statistics (CJS) by serving as editor-in-chief from 1977 to 1980. He continued to exercise leadership beyond his retirement in 1986, spending eight years as a Professor at York University, where he helped to build up statistics.

Elected to the Royal Society of Canada at the age of 42, Don was the first recipient of the Gold Medal of the Statistical Society of Canada (SSC) in 1985. He later received honorary degrees from the University of Waterloo (1992) and the University of Toronto (2002), and was appointed Officer of the Order of Canada in 2011 in recognition of his contributions to science and society. His accolades include fellowships in the Institute of Mathematical Statistics (1954), the Royal Statistical Society (1956), the American Statistical Association (1962), the American Association for the Advancement of Science (1971), and the American Mathematical Society (2015), as well as an elected membership in the International Statistical Institute (1962). Moreover, he was the 1990 recipient of the R.A. Fisher Award and Lectureship, became an honorary member of the SSC in 1991, and received the Gold Medal of the Islamic Statistical Society in 2000.

Don was born in Toronto on April 29, 1925, to physician Maxwell John Fraser and his wife Ailie Jean Stuart. Raised in Stratford, Ontario, he attended St. Andrew’s College in Aurora from 1939 to 1942, and the University of Toronto from 1942 to 1947, completing a BA in mathematics, physics and chemistry in 1946 and an MA in 1947. He distinguished himself very early as a Putnam fellow and member of the first-place team in the Putnam international mathematics competition in 1946. This singular achievement qualified him for admission and a graduate scholarship at Princeton University, where he completed his PhD within two years. It is there that, under the mentorship of John Tukey and Samuel Wilks, he specialized in statistics, which was then a newly developing field.

Upon graduating from Princeton in 1949, Don returned to the Department of Mathematics at the University of Toronto as an assistant professor of statistics. He quickly acquired a reputation both in teaching and research, and became a full professor at the age of 33. He was responsible, virtually single-handedly, for developing statistics at his institution. He succeeded in building a strong and broadly based research group there; many of his students became successful academics in Canada and abroad. While his own research was focused on theory, he recognized early the importance of statistical computing and the need to develop infrastructure and to hire in that field.

From his exchanges in the early 1950s with Sir Ronald A. Fisher to the very end of his career, Don’s work was marked with audacity and extraordinary originality. He quickly became one of the early leaders in pedagogy by writing two widely used textbooks: Nonparametric Methods in Statistics (1957) and Statistics: An Introduction (1958). As his reputation in both research and teaching grew, these books became classic references. In 1976 he wrote a third book, Probability and Statistics: Theory and Applications, that was also well received.

From the beginning of his career, Don made many highly original and important contributions to statistical theory. One of the most widely cited is a landmark paper called “Structural probability and a generalization” (Biometrika, 1966). Authored solo, as were most of his writings between 1951 and 1970, this paper provided the outline for a new approach to inference called structural inference, which used in an essential and innovative way the mathematical structure of a wide class of stochastic models. With colleagues and students, Don later developed and extended this theory in a large number of research papers, and in the research monographs The Structure of Inference (1968) and Inference and Linear Models (1979). In recognition of the importance of this contribution, Don’s 1966 paper was reprinted in Breakthroughs in Statistics: Foundations and Basic Theory (Springer, 1992).

Don’s work on structural inference emphasized the central role of the likelihood function in statistical inference. This point of view, which is broadly accepted today, ran counter to widely held views at the time. In the 1980s and 1990s, much research was devoted to approximations in the area of likelihood asymptotics. Don’s research, conducted in large part with Nancy, was at the forefront of these developments, from his groundbreaking introduction of the tangent exponential model (Biometrika, 1990) to his paper with Davison, Reid, and Sartori on directional inference (Journal of the American Statistical Association, 2014). His contributions to the asymptotic theory of inference, combined with his earlier work on structural inference, helped to shed new light on the interface between the Bayesian and Fisherian schools of thought in unexpected ways. His 2010 paper in the Journal of the Royal Statistical Society, Series B, coauthored by Reid, Marras, and Yi, directly addressed this debate.

Throughout his career, Don maintained an exceptionally active program in research, publishing important work in all the leading statistical journals. With characteristic originality, he saw links between likelihood inference and areas which most people would have viewed as tangential to his interests. For example, his 2007 paper with Bédard and Wong, published in Statistical Science, was noteworthy for proposing an innovative approach to Markov chain Monte Carlo sampling, whose computational aspects he developed to considerable success.

Don’s influence in research was profound, but perhaps more striking still is the influence he had on several generations of scientists. Among many others, David Brillinger, Arthur Dempster, and Stephen Fienberg repeatedly acknowledged the importance of Don’s mentorship in starting their careers. Don’s long list of PhD graduates includes three SSC Gold Medalists, Irwin Guttman (1955), Ivan Fellegi (1961), and David Andrews (1968), but also Keith Hastings (1962) of Metropolis–Hastings fame, Ross Prentice (1970), former director of the Public Health Sciences Division at the University of Washington, Kai-Wang Ng (1975), professor at the University of Hong Kong, former CJS Editor Grace Yi (2000), as well as several other research statisticians working in Toronto and elsewhere in Canada. Don also had a special connection with Nancy Reid, a kindred spirit with whom he published over 50 papers — and had two daughters.

Don’s personal life was as extraordinary as his professional accomplishments. He was a man of insatiable curiosity, always in search of the unique and the unconventional, highly energetic and constantly seeking to test his limits, both mental and physical. He spoke enthusiastically of the canoe trip he once made in his twenties to James Bay and he remained, late in his life, an avid swimmer, a waterskier in the summer, and a snowmobiler in the winter. His lifelong interest in architecture also occupied his mind. At Lake Temagami, where he spent nearly all his summers, he oversaw the construction of several cabins, docks, etc. His passion for building is also immortalized in the “Fraser House” at 4 Old George Place, in Toronto’s neighborhood of Rosedale, which he commissioned the famous architect Ronald J. Thom to design for him in 1964.

Don leaves in mourning his wife Nancy, their daughters Ailie and Donelle, five other daughters from previous marriages, Julie, Danae, Maia, Andrea, and Ailana (the latter three are professors of mathematics in Canadian universities), as well as several grandchildren and great grandchildren. He will continue to live on through the many scholarly contributions that made him a titan of statistics, but also through the positive influence he had on so many people, including over 350 academic descendants, and the lasting impression he gave of a kind, joyful, humorous, enthusiastic, energetic, hard-working, clever human being.

In his 2009 book entitled Sum: Forty Tales from the Afterlives, David Eagleman wrote: “There are three deaths: The first is when the body ceases to function. The second is when the body is consigned to the grave. The third is that moment, sometime in the future, when your name is spoken for the last time.” Speaking of the third death, Don Fraser will outlive most of us.

Additional information on Don’s career and his views on statistics and science can be found in his discussion with Tom DiCiccio and Mary Thompson published in the May 2004 issue of Statistical Science (vol. 19, no. 2, pp. 370–386). An interview of Don is also available from the Videotape Archives of the American Statistical Association.