Institute of Mathematical Statistics
Fostering the development and dissemination of the theory and applications of statistics and probability
Renew / Join IMS
Remembering Lucien Le Cam
February 23, 2021

Every three years, the IMS chooses a Le Cam Lecturer, one of our most prestigious awards. But who was Le Cam, and why was his work so important? The following is slightly condensed from the obituary written by Rudolf Beran and Grace Yang, which was published in the IMS Bulletin in September 2000.

The 2021 Le Cam lecturer is Jianqing Fan; read a preview of his lecture here. 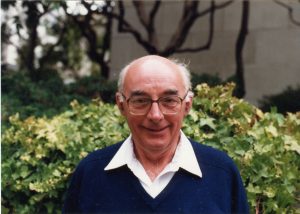 Lucien Le Cam, one of the most important mathematical statisticians in our century, died on April 25, 2000. He was Professor Emeritus of Mathematics and Statistics at the University of California, Berkeley. His wife of 48 years, Louise Romig Le Cam [daughter of statistician Harry Romig], their children Denis, Steven, Linda and son-in-law Rick Kreisler, and his brother Jean Le Cam survived him.

Born on November 18, 1924 in Croze, Creuse, central France, Le Cam was a fils de paysans (roughly, son of farmers) in Felletin, where many years later his brother Jean became Mayor. He graduated in 1942 from a Catholic boarding school in Guéret. Higher education would be possible on scholarships only. He attended a seminary after high school. Unable to accept that permission was needed from the head priest to read chemistry books, he quit the seminary after one day. By then it was too late in the year to apply for a scholarship in the nearby University of Clermont-Ferrand. His only option, with partial financial support, was to take mathematics courses at a lycée in Clermont-Ferrand. He gave up chemistry for mathematics, stayed at the lycée for two years, and then passed the examination in general mathematics set by the University of Clermont-Ferrand. In 1944, he registered as a student at the University of Paris. A job opportunity that required a “certified” statistician prompted him to pass examinations on calculus, rational mechanics, and statistics, whereupon the university awarded him the degree Licence ès Sciences in 1945.

Through an introduction by Darmois, Le Cam worked for E. Halphen at Electricité de France for the next five years. He investigated how to operate dams for best results and how to estimate probabilities of drought or flood. In his first publication at age 23, he introduced characteristic functionals (after but independently of Kolmogorov) to study the temporal and spatial flows of streams. The paper was communicated by Emil Borel to the French Academy. A subsequent publication on precipitation in the Second Berkeley Symposium (1961) is known in hydrology as Le Cam’s model.

Le Cam and several other young people formed a weekly seminar on statistics mentored by Darmois at the University of Paris. An encounter with Jerzy Neyman around Easter 1950 resulted in a one-year invitation to Berkeley as an instructor. Urged by Neyman, he stayed as a graduate student and received a PhD in 1952. Almost immediately, he produced his first PhD student, Julius Blum. The astonishing speed of Le Cam’s accomplishments was not without difficulties: the Dean was unwilling to designate a fresh new PhD holder as the official thesis advisor of another student.

Appointed as Assistant Professor of Mathematics in 1953, Le Cam joined the new Department of Statistics at its founding in 1955 and was promoted to full Professor in 1960. He served as department chairman from 1961 to 1965 and was a co-editor with Neyman of the celebrated Berkeley Symposia volumes. He remained in Berkeley except for a brief stint (1972–73) as Director of the Centre de Recherches Mathématiques in Montreal, Canada.

The 38 PhD students he supervised at Berkeley include prominent names in our field. His legendary broad knowledge was reflected in the wide range of his students’ thesis topics. Odd Aalen wrote a thesis in biostatistics on survival analysis; Le Cam’s last student, Jim Schmidt, was in physics. He was generous with ideas in discussions with students and others. He was renowned for upholding a strong standard of fairness and supported the students’ Free Speech Movement in the mid-1960s. In 1991, Le Cam became Professor Emeritus, a transition that scarcely changed the daily pattern of this outstanding scholar and teacher. As before, any who wished to discuss research were welcome to enter his open office door.

Le Cam’s most widely-recognized contributions were the local asymptotic normality condition (LAN) in 1960, the contiguity concept and its consequences, and simple one-step constructions of asymptotically optimal estimates. Around 1970, Jaroslav Hájek and Nobuo Inagaki independently formulated the convolution theorem for parametric estimation. Using Le Cam’s LAN concept, Hájek proved the convolution theorem and, in another paper, the local asymptotic minimax theorem under elegantly minimal assumptions. These theorems, as well as Hájek’s earlier use of contiguity in studying rank tests, revealed to others the remarkable potential in Le Cam’s ideas, and popularized them.

While still working on LAN conditions, Le Cam simultaneously tackled a more basic issue in statistical decision theory. He introduced a distance and deficiency between statistical experiments in 1959 and treated insufficiency in 1974. The Le Cam distance and deficiency are fundamentally important in making approximations and asymptotics fit within Wald’s (1950) theory of decision functions. Le Cam’s generalization of decision theory appeared in a landmark paper in 1955. A consequence of the Le Cam distance was the concept of “weak convergence of experiments.” This convergence is significantly weaker than weak convergence of likelihood ratio processes because it does not require tightness of the processes. Tightness itself was pioneered by Le Cam (1957). Weak convergence of experiments lay behind his generalizations of the asymptotic minimax and convolution theorems. Recent results on the asymptotic equivalence of nonparametric density estimation and nonparametric regression have again revealed the scope of Le Cam’s mathematical structure.

In other work, Le Cam introduced a concept of metric dimension with which he proposed a new method of constructing confidence sets for arbitrary parameter spaces. This notion has helped unify studies of “rates of convergence” of estimates. Outside statistics proper, Le Cam investigated convergence of measures on topological spaces and gave what may be the first usable definition of (bounded) Radon measures on completely regular spaces. He obtained an approximation theorem for the Poisson binomial distribution (1960) and some new inequalities for approximating the distributions of sums of random variables by infinitely divisible ones. Motivated by problems in other fields, Le Cam worked on stochastic models for rainfall, for cancer metastasis, for effects of radiation, for sodium channels, and more. He co-edited a 1982 book with Neyman on Probability Models and Cancer.

Le Cam’s monumental work on asymptotics culminated in his “big” book, Asymptotic Methods in Statistical Decision Theory, which was published in 1986. Through formal comparison of statistical experiments by means of the Le Cam distance and deficiency, the book quantifies the extent to which two statistical problems are similar and the extent to which a procedure approximately efficient in one problem can be mapped into a procedure approximately efficient in the other. Asymptotic decision theory is then developed from this point of view. His abstract style of writing may well reflect his life-long passion for reading Bourbaki. The 1990 book Asymptotics in Statistics: Some Basic Concepts, co-authored with Grace Yang, re-expresses Le Cam’s earlier research results from the viewpoint of his later work. The manuscript of the second edition was completed just before his death.

Active to the end, he is deeply missed. May the earth rest lightly upon him.