Institute of Mathematical Statistics
Fostering the development and dissemination of the theory and applications of statistics and probability
Renew / Join IMS
Obituary: S. James Taylor 1929–2020
February 23, 2021 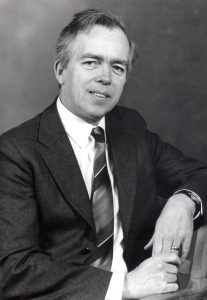 James Taylor died in Sevenoaks, Kent, on 22nd January 2020. He was born on 13th December, 1929 in Carrickfergus, Northern Ireland, but spent most of the first decade of his life in Nigeria, where both his parents were missionary teachers. His family returned to Northern Ireland at the start of the Second World War, and James completed his high school education there.

James’s first degree was a BSc in physics and mathematics at Queen’s University, Belfast. He then went to Peterhouse, Cambridge, where he studied for a PhD in Pure Mathematics, supervised by A.S. Besicovitch. In 1952–53 he won a visiting fellowship to Princeton University, and began there his fruitful collaborations with probabilists in the USA.

He then held a postdoctoral position at Peterhouse in Cambridge, until he moved to his first tenure-track position at Birmingham in 1955. (C.A. Rogers, with whom James wrote several papers, was then Mason Professor of Mathematics at Birmingham.)

In 1962 he moved to Westfield College, London, where he stayed until 1975. During this time he hosted many visitors to London, in particular Sidney Port, Dick Gundy, and Mike Marcus. He then moved to a chair in Liverpool (1975–1983), and then, in 1984, he became Wyburn Professor of Mathematics at the University of Virginia. After his retirement from Virginia in 1996 he and his wife Maureen returned to England.

James could not remain long in a department without finding himself chosen as Head; he was a calm, balanced, and gifted administrator, and was able to combine administrative duties with mathematical research in a fashion that most of us can only envy. He handled difficulties with good humour, and never lost sight of the fact that the purpose of administration is to serve the academic goals of a University. He is particularly remembered at the University of Virginia for his work in the creation of the Statistics Department there.

James very much enjoyed travel and mathematical collaboration; he spent sabbatical years at Cornell, Michigan and UBC, and also made many shorter visits. When he could, he would interlace a year as a visitor between two permanent appointments — for example after leaving Liverpool, he spent a year at UBC before starting at Virginia.

In collaboration with probabilists in the strong mid-Western schools (Pruitt, Orey, Jain and Fristedt), James contributed much to the development of the theory of stable processes. With Bill Pruitt, he wrote two papers giving a very detailed account of the path structure of the asymmetric Cauchy process; this is the only stable process for which the asymmetry plays a significant role in the path properties. Their proof that the range of these processes is nowhere dense is a masterpiece of intricate sample path analysis.

In a fascinating paper with Orey, James initiated the study of exceptional points of Brownian motion by looking at “fast points,” that is, points where the law of the iterated logarithm fails. Subsequent work by B. Davis, Perkins and others, has led to a very good understanding of the complementary sets of “slow points,” but our knowledge of the wilder fast points has advanced little.

James was elected a Fellow of the IMS in 1986, and was an organiser of the Seminar on Stochastic Processes.

James was a generous and honourable man, an outcome of his life-long, deep and publicly avowed Christianity.

His discovery of the Trinity Presbyterian Church in Charlottesville, a church compatible with his zeal and missionary commitment, was an important factor in his decision to come to Virginia. His post-retirement travel had the twin goals of conducting mathematical research, and speaking to others about his Christian faith.