Institute of Mathematical Statistics
Fostering the development and dissemination of the theory and applications of statistics and probability
Renew / Join IMS
Obituary: Arianna Rosenbluth 1927–2020
February 23, 2021 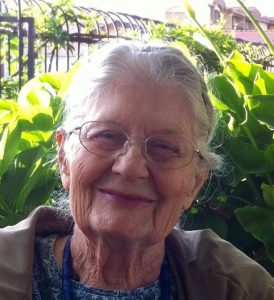 Arianna W. Rosenbluth passed away on December 28, 2020. Born on September 15, 1927, in Houston, Texas, Arianna attended university at the Rice Institute, now Rice University, where she received a Bachelor of Science in 1946. In 1947 she obtained her Master of Arts from Radcliffe College before beginning her PhD in physics at Harvard University under the supervision of Nobel Laureate John Hasbrouck Van Vleck. She completed her thesis, entitled Some Aspects of Paramagnetic Relaxation, in 1949 at the age of 22.

After completing her thesis Arianna won an Atomic Energy Commission postdoctoral fellowship to Stanford University, which she attended before moving to a staff position at Los Alamos National Laboratory. Here, her research focused on atomic bomb development and statistical mechanics. In 1953 she collaborated with Nicholas Metropolis, Marshall N. Rosenbluth, Augusta H. Teller, and Edward Teller on the seminal paper “Equation of State Calculations by Fast Computing Machines” that introduced what is now known as the Metropolis method, and the birth of Markov chain Monte Carlo. She also developed the implementation of the algorithm for the MANIAC I hardware, making her the first person to ever implement the Markov chain Monte Carlo method.

Over the next few years Arianna and Marshall Rosenbluth applied the method to novel studies of statistical mechanical systems, including three-dimensional hard spheres and two-dimensional Lennard-Jones molecules and two and three-dimensional molecular chains. Although not widely known, these papers introduced Markov chain Monte Carlo heuristics that are still important today, including careful analysis of convergence by comparing multiple runs from different initial conditions.

After the birth of her first child, Arianna left professional research to focus on raising her family, although she continued research and programming throughout her life, especially on problems in knot theory.

Early in her life Arianna was an accomplished fencer, winning not only the Texas women’s championship in foil but also the Houston men’s championship. Her plans to complete in the Olympics were prevented first by the cancellation of the 1944 Summer Olympics and then inability to fund participation in the 1948 summer games. She was an avid birdwatcher and reader, especially of science fiction novels.

Arianna is survived by her four children, five grandchildren, one step-grandchild, and two great-grandchildren. In lieu of flowers the family welcomes donations to the ASPCA, one of Arianna’s favorite charities.