Institute of Mathematical Statistics
Fostering the development and dissemination of the theory and applications of statistics and probability
Renew / Join IMS
Celebrate Women in Statistics and Data Science
November 15, 2020

But who was Florence Nightingale? And why is she significant to us?

On 12 May 2020, it was the 200th anniversary of Florence Nightingale’s birth. Nightingale (12 May 1820–13 August 1910) was a British social reformer and statistician, and the founder of modern nursing. She came to prominence while serving as a manager and trainer of nurses during the Crimean War, in which she organised care for wounded soldiers, earning her the nickname “The Lady With The Lamp,” [as illustrated, right]. 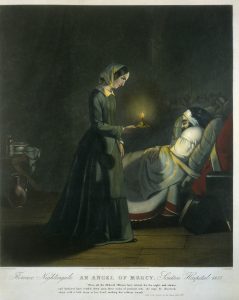 “An Angel of Mercy”: Florence Nightingale with her candle making the night round of the wards at Scutari hospital.
Credit: Wellcome Library, London. CC BY 4.0

In 1860, Nightingale laid the foundation of professional nursing with the establishment of her nursing school at St Thomas’ Hospital in London. It was the first secular nursing school in the world and is now part of King’s College London. There’s an interesting museum dedicated to Nightingale, her life and legacy, at St Thomas’ Hospital: https://www.florence-nightingale.co.uk.

In her lifetime, Nightingale published work concerned with spreading medical knowledge. She was a pioneer in the development of statistical graphics to visually represent data and developed diagrams called coxcombs [left], 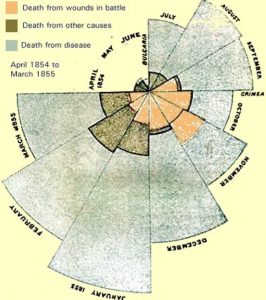 using them to illustrate the various causes of death during the Crimean War—in particular, that far more soldiers died from infectious diseases than in battle—leading to life-saving political changes and sanitation improvements.

Florence Nightingale was the first female member of the Royal Statistical Society.

She also had a pet owl, called Athena.