Institute of Mathematical Statistics
Fostering the development and dissemination of the theory and applications of statistics and probability
Renew / Join IMS
Radu’s Rides: The Stink of Mathematical Righteousness
October 2, 2020

In an interview for the Canadian Broadcasting Corporation, Robert Thurman, who was, until his retirement in 2019, the Je Tsongkhapa Professor of Indo-Tibetan Buddhist Studies at Columbia University, warned listeners about the potentially noxious and certainly annoying “stink of enlightenment,” which is the prideful attitude of spiritual seekers who start to believe that whatever progress they have achieved is enough to thumb their noses at others’ efforts towards spirituality. The phrase not only stuck with me but also resonated deeply because of the complex relationship we statisticians have with mathematics.

Before I put your nose out of joint with the implications of the title, let me quickly add that I do not plead here for quick (and dirty) justifications of our ideas, rushing towards publication with only cursory mathematical backing and some conveniently favourable simulations that eventually lead to minimum publishable units. Our ties with Mathematics should—and do, in fact—run much deeper than that. They are also highly personal, as many of us have entered Statistics through its grand gates. One can wonder whether this is an auspicious passageway for a statistician’s career or not, but that is a debate better left for another time. For the sake of this discussion, let us agree that if we had to paint this intellectual landscape with a broad brush, we would see that for some, Statistics is merely an offspring of Mathematics forever aspiring to prove its worth to an imperturbable parent. Others recognize the historical ties between the two fields, but are quick to point out that modern developments and demands have moved them further apart. The former group’s members are intensely preoccupied by the mathematical rigour and beauty of a statistical idea or argument, while the latter’s are constantly reminding us that Statistics is evolving in a direction in which mathematics plays second fiddle to the development of a “statistical method,” a nutritional cocktail that contains the fiber of an astute idea and a dollop of intuition, with everything dressed in smart computation and marinated in an understanding of randomness that must be the envy of every bookie in the world.

What I describe above are evidently the two poles, with countless intermediate positions muddying the debate. Nevertheless, this is a schism with multiple reverberations in a field that has already plenty of rifts crisscrossing its history and membership. For instance, the impact on dissemination and publication of statistical papers is felt at all levels of seniority, with a more sobering impact on our young colleagues and students. You don’t need to keep an ear too close to the ground to hear grumblings about papers being rejected by top journals simply because the mathematical proofs lacked novelty. At a recent JSM, held in a picturesque Canadian city, a statistician famous for both his statistical sense and mathematical prowess had deplored the fact that good statistical ideas are no longer publishable unless they are accompanied by a lengthy, preferably cumbersome, mathematical proof. In a more recent example, when the finding of a simpler proof was announced on a social media platform, many unsolicited suggestions made it very clear that it would be wiser to keep the more complicated version in the paper, lest it be rejected.

While it is widely recognized that statistics is now dancing with computer science, applied mathematics and other sciences at the Data Science shindig, our flagship journals seem to ignore this shift in research interests and focus. To crystallize the message, let me simply ask: where is one supposed to submit a paper that contains a good statistical idea/analysis that solves a relevant problem which is theoretically supported by, alas, non-spectacular theory? If the acceptable answers to this question involve only second- or third-tier journals, we may agree that this piece’s title smells less funny. I am the first to admit that a beautiful mathematical proof is a sight to behold, a joyful bonus that hopefully accompanies a powerful idea.

But to ask most of our impactful work to produce one is akin to asking all Wimbledon champions to win by playing with a wooden racket. Funnily enough, even in the world of abstract beauty we stubbornly try to emulate, things have evolved. The concept of a computer-assisted proof, a sure heresy on these self-righteous shores, is now widely accepted in mathematics. An immediate example is offered by the recent proof that the Conway knot is not “slice,” produced by MIT Assistant Professor Lisa Piccirillo (if you have a moment, read her uber-cool story here) and published in the Annals of Mathematics, a journal that is widely regarded as the embodiment of mathematical rigour and prestige.

Publication aside, the search for mathematical prowess at the expense of statistical one is affecting the hiring process too. During my department’s multiple inter-disciplinary hiring campaigns, we have encountered beautiful statistical ideas that deal with modern societal challenges. Only rarely these talks were accompanied by mathematical proofs that could make your (metaphorical, maybe) hairs stand on end. On the flip side, we have listened to talks that dodged questions of relevance and practicality, as both were sacrificed on the altar of a complex mathematical approach. We should aspire to nurture both paradigms, but I have no doubt that if statisticians want to increase their visibility and influence in society, they simply cannot leave behind the innovators from the former group.

At the end of a summer that has been much less (or way more) than most of us wanted it to be, which is a lesson in humility if there ever was one, I invite you to populate with your own thoughts and feelings this deceptively simple Zen koan: “Before enlightenment: chop wood and carry water; after enlightenment: chop wood and carry water.” Namaste. 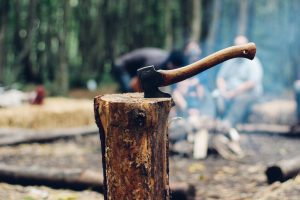