Institute of Mathematical Statistics
Fostering the development and dissemination of the theory and applications of statistics and probability
Renew / Join IMS
Obituary: Willem van Zwet 1934–2020
August 13, 2020 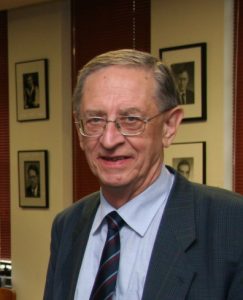 Willem Rutger van Zwet, emeritus professor at the Mathematical Institute Leiden, passed away in the morning of July 2, 2020 at the age of 86 years.

Willem (“Bill”) van Zwet was born in 1934 in Leiden, and attended the gymnasium (high school with classics) in The Hague. During his subsequent studies in mathematics and physics at Leiden University (1951–59; where, after three years, “his grades were okay but there were not many of them”, as he revealed in the interview quoted below) he chose to specialize in statistics, a subject not taught at the university at the time. Willem took courses with David van Dantzig in Amsterdam, who, although a pure mathematician by training, is viewed as the first mathematical statistician in the Netherlands.

In 1964, he obtained a PhD with Jan Hemelrijk, an applied statistician and pupil of van Dantzig, who had passed away in 1959. While preparing his (theoretical) thesis, Willem engaged in statistical consultation during many of his working hours. In an unpublished interview in 2002, Willem mentioned van Dantzig and Hemelrijk as the greatest influences on his career, together with Peter Bickel.

After a stay at the University of Oregon in 1965, Willem returned to Leiden University and was quickly, in 1968, promoted to full professor in Statistics. He stayed in Leiden until his mandatory retirement in 1999, which he accepted with a farewell address under the title “No complaints so far”. His involvement in the statistical community continued until recently.

Willem was both a renowned scientist and a powerful organizer. His work on asymptotic expansions and higher-order efficiency of non-parametric statistics is well known, but he has also worked on a wide range of other topics, including resampling methods, plant cell statistics and spatial stochastic processes; his thesis work (published as a monograph in 1964) on convex transformations of random variables is still cited. Willem was a superb lecturer and delivered the Hotelling (1988), Wald (1992), and Bahadur (2005) lectures, among many others.

Willem was skilled as an administrator: for Leiden University, where he served as dean in 1982–83, but also as chairman of the board of the National Herbarium, chairman of the scientific committee of the Leiden University Fund, and as promoter for the honorary doctorate awarded to Erich Lehmann (1985). Moreover, he will be remembered for his work at the national and international level. From 1961–96 he was almost continuously committed to the Mathematical Center (now CWI) in Amsterdam that served as a national focus point for applied mathematics, including statistics, which was novel at the time. He was co-founder and first director of EURANDOM from 1997–2000, a vibrant research institute in Eindhoven, populated by around 25 postdocs, in rolling two-year periods, and attracted many of the world’s foremost statisticians and probabilists as guest lecturers and researchers. He was also the initiator of the famous Stochastics Meetings Lunteren, an annual gathering of Dutch statisticians and probabilists with prominent speakers from all over the world, picked by Willem himself (1972–99), which are still being continued. Perhaps the most impressive administrative achievements were international. Willem served as president of the IMS, of the Bernoulli Society and of the ISI, as editor-in-chief of the Annals of Statistics and of Bernoulli, as board and corporation member of the National Institute for Statistical Sciences in North Carolina, as member of the board of directors of the ASA, and held many other offices and memberships of programme, prize, review, advisory, restructuring, organizing or publication committees.

From 1967–93, Willem was a frequent visiting scientist at the University of California at Berkeley, and from 1990–98 he divided his time between Leiden and Chapel Hill, where he was William Newman professor. As well as these and other close ties with the US, Willem maintained intensive contacts with statisticians in the Eastern Bloc, and played a role in the exchange between researchers on the two sides of the then “iron curtain”. He loved Prague, with its named symposia and prominent statisticians. He was just as immersed in the western European statistical community, with Oberwolfach as another special meeting place.

Willem received numerous prizes and honours for his work, including an honorary doctorate from Charles University in Prague and memberships of the Royal Netherlands Academy of Sciences and the Academia Europaea. The list is too long for inclusion here. Willem himself would have been proud to mention his knighthood in the “Order of the Netherlands’ Lion,” a token of appreciation by his home country (1996). Willem was instrumental in seeing similar honours bestowed on his international colleagues, including Peter Bickel, Jon Wellner and Marie Hušková.

Given the minimal presence of statistics in the Netherlands at the start of his career, it is no surprise that Willem was important for the development of statistics in the country. At one time Willem was the scientific father or grandfather of most mathematical statisticians in the Netherlands and little could proceed without his knowing. Although Willem did not form a “school” and was liberal as an advisor, his 16 PhD students took advantage of his authority, support and inspiration, and all of them pursued scientific careers at home or abroad. Willem was succeeded at Leiden University by his student Sara van de Geer (now at ETH, Zürich), next student-of-student Richard Gill (now emeritus), and currently by student Aad van der Vaart. The Netherlands Statistical Society established an annual Willem van Zwet Award (for best PhD thesis) in 2012.

Willem’s career coincides with a period of major changes in statistics, but also in the world of science in general. A 2006 interview by Rudy Beran and Nick Fisher gives an interesting, and sometimes hilarious, picture of that period and Willem’s vision of it, which is still relevant today. It was published in Statistical Science in 2009: “An Evening Spent with Bill van Zwet” (https://projecteuclid.org/euclid.ss/1255009013).

One of Willem’s hobbies emerges in his answer to Rudy and Nick’s question: If you were stuck on a desert island with a limited choice of reading materials which of your papers, among those available, would you take with you? Willem van Zwet replied, “That is a strange question. Why would I take any of my papers? A crate of Dutch jenever [gin], or bourbon if you like, would make a lot more sense.”

We remember that it had to be “oude jenever”, not the more common and a little cheaper “jonge jenever”. Old gin for old people, we young people used to think. And now we are old ourselves, and will miss the towering presence of Willem van Zwet.