We live in extraordinary times. Even though there have been several warnings about the dangers of a pandemic, as, for example, Bill Gates’ warning in 2016, many world leaders did not take them into account. Moreover, some countries like the United States reduced their budgets related to health issues and, in particular, to epidemics. The crisis resulting from the COVID-19 pandemic “took us by surprise”; “We were not prepared”; “It’s never happened before”—as we have repeatedly heard from politicians who failed to adequately respond.

But I wish to speak of another crisis that is brewing, and may, sooner or later, result in a pandemic of sorts as well. I am talking about the decline of higher education. I am interested, in particular, in mathematics and probability/mathematical statistics education and research (I tend not to put strict boundaries between the two). I have had the chance to work in many universities on both sides of the Atlantic. My observations span at least 30 years, excluding my years of study as an undergraduate student in Athens and as a graduate student at Berkeley. I have observed the decline of educational standards, year after year. I never believed that the day would come when a student could get a degree in statistics without knowing the difference between a random variable and a sample; or a degree in mathematics without knowing what uniform continuity is about; or a degree in computer science and be unable to write a few lines of code. Yet it’s happening, and not just in “those bad” universities but in reputable ones. We’re witnessing an unprecedented decline. I’m not referring to the presence of exceptionally poor students, but to the large fraction of them in that category. If, say, 50% of students graduate from a mathematics, or related, department, without being able to understand and use the basic tenets of logic, then this should raise an alarm. 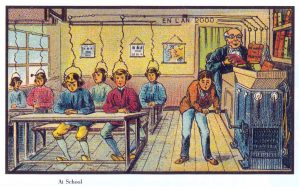 One of the prophetic drawings by Jean-Marc Côté who envisioned what France would look like in the year 2000 and presented at the 1900 World Exhibition in Paris.

“They’re not going to become neurosurgeons,” a colleague, who currently holds a top administrative position at a world-class university, once told me. “Just give them a grade and pass them.” The students we were discussing had totally failed to complete their assigned projects, though they were merely based on a good understanding of simple stochastic processes models and concepts. This is the attitude of many a modern university: award degrees at all costs.

I would like to mention and briefly discuss six interrelated causes of the decline of education.

Changing the meaning of teaching and learning

As I mentioned in a previous column, teaching and learning ought to be processes that require thinking and understanding. These processes have been substituted with merely teaching examples and essentially asking students to memorize rules. A case at hand for probabilists and statisticians is our “law of large numbers” which is considered as a law, rather than as a theorem that can, under some conditions, be proved to hold. Students, encouraged by professional teachers, are told that it is a law. This results in funny situations such as, when a class of students are asked to compute the probability that in 10,000 fair coin tosses we obtain 5,000 heads and 5,000 tails, 49% of them reply that the probability is one, 49% reply that it is one-half (a mere 2% get it right), but both groups reply that this is due to the law of large numbers! Obviously, they have no clue what the law of large numbers says, let alone understand a proof in a simple case. Teaching has become equivalent to vocational training. Learning has become synonymous with rote learning.

Treating students only as customers

I first heard the term “student as customer” in Austin, Texas in the ’90s. I thought it was a really bold, and honest, attitude of the administrators who put forward this notion. But it was just the beginning. Of course, students are, in some sense, customers seeking to obtain knowledge. But they are not customers without responsibilities. In many universities in the UK, for instance, students have a say, and can veto, whether a course should be taught or not. For example, if students decide that Real Analysis should not be offered because it is of no practical use then students can veto such a course. There is an obvious problem here. How can a beginning student have the expertise to understand why such a topic might be useful? Even businesses do not work this way. First-time customers, for instance, typically do not have a direct say on what their “smart” phone will be equipped with, software-wise; it is the company that decides. In a university, this often results in curricula, partly designed by students, to satisfy students’ beliefs about what their education should be like. One outcome: large numbers of students graduate having learned the rules and regulations of Itô calculus for Brownian motion, for the practical purpose of computing the price of a financial instrument, but without understanding what Brownian motion is.

Using exams as a (fake) certificate of acquired knowledge

I mentioned in my previous article that exams are a system of rewards that is weakly correlated with the knowledge obtained. In fact, I have now more reasons to believe so. For example, in a large number of reputable universities, the exams have become extremely standardized: An exam must have exactly the same number of points and the same number and (known) type of questions as the one of the previous n years (where n is, say, 10). So, for example, if during the previous years there has never been a question on the proof of the central limit theorem, then one is not allowed to ask this question in a current exam on mathematical statistics. Students are encouraged to study previous exams and their solutions, and are told that this will help them pass the current one. If a student receives a good grade in the exam, then both the students and the university agree that this means that the student has learned the subject. And yet, it may only mean (and it does in most cases) that the student has learned the mechanics of a problem, a mere recipe that they can blindly apply, and nothing more. That is, there is no conceptual learning that can be applied to other, possibly open-ended problems.

There is a dictum beloved by bureaucrats: everything is quantifiable by a single number. A scientist’s value is measured by his or her h-index (a rather bogus, arbitrarily defined quantity that is easily manipulated: see “Citation Statistics” by Robert Adler, John Ewing, and Peter Taylor, Statist. Sci. 24(1), 2009, pp.1–14). A journal’s importance is measured by its impact factor (a number that is often manipulated by asking the authors of a paper accepted in a journal to cite at least two papers previously published in the same journal). An instructor’s value is measured by the student satisfaction score. The latter number is based entirely on whether students felt happy. Happiness is, of course, subjective and hugely correlated with whether the student feels comfortable that they will pass the exam and whether they feel they “learned” the material without any effort at all. And so, what happens, especially among younger faculty members who wish to be promoted, is that they try to please the students by ensuring them that they can “learn” everything effortlessly. On the other hand, someone who teaches them how to think conceptually will almost never obtain a good score. Student satisfaction surveys are very flawed. I remember in one UK university the following question was asked: “How do you rate your instructor’s helpfulness, even if you never sought help?” Long after the fact, students often themselves realize that the courses from which they learned most are the courses that taught them honest mathematical thinking, and regret that they didn’t give the instructor a good score. Such professors often struggle to remediate students’ lack of preparedness before covering new material. To capture this, many universities experimented with exit interviews and evaluations. Alas, these were often quickly abandoned, as they were inconsistent undergraduate surveys. In the words of a colleague from a world-class university (whose identity I cannot reveal), “We [of the older generation] know what a real university is and can be, where teachers are not afraid of students and don’t try to make them happy at any cost; we are gone—this knowledge, and the very idea, are gone.”

Trivializing the design of courses

How do we design a course in, say, complex analysis? Well, the standard method is that we first make sure we understand the subject. Then we discuss with other colleagues, those who also understand the subject. Finally, we design a syllabus, identify the prerequisites, and see how it fits into the curriculum. But there is another method: Suppose we eliminate entirely any discussion about content and, rather, pass the course proposal via a committee of people who may not understand the subject. We make sure, however, that we have detailed what computer software and what online teaching platforms we will use, how many hours per week the students must study, what percentage of them will be expected to pass the exam, and design the exam before the course starts. The committee may send it to a subcommittee or working group for further discussions. The subcommittee reports to the committee that sends it to a higher-level committee that checks quality as measured by numbers. Alas, it is this second method that has been adopted by many universities.

Of course, universities have to generate revenue. If income is based mostly on keeping its customers happy, then, by increasing happiness, universities manage to increase their education prices. This can result in a 150% increase in education costs in the US since 1998, versus 54% inflation in the same period (and commensurate rapid growth in compensation for senior university administrators). Revenue is generated either year after year, by the student paying tuition and fees (possibly, as in the US, through education loans that increase 8 times faster than wages) or by the government providing money to the university for each student successfully graduating (as is, for example, the case in Swedish universities). The latter is actually worse, because universities have an incentive to increase throughput as fast as possible. (Why fail a student if that will result in delayed income?) Clearly, all that has a direct consequence on standards of education.

The products of a university are education and research. These are things that ought to be intimately connected. Alas, university administrators have, by establishing a regime of trivial education standards, directly or indirectly separated the two. Many universities rely on foreign students for generation of income. A student from country A will pay to study in country B if, theoretically, the education obtained in B is better than in A. In practice, however, the real quality of education has little to do with the student’s decision. Rather, it is the desire to obtain a degree from a “reputable” university that influences the student’s professional success. If the reputation, however, does not reflect the actual outcome (has the student actually learned mathematics or has he/she passed the exams with, possibly, high grades?) then, sooner or later, there will be a crisis.

Epidemics, when they occur, spread like a fire, unless they are contained early on. But to contain them, one has to acknowledge their existence and study the structure and dynamics of the virus. We’ve seen the consequences of doing so with COVID-19. The brewing epidemic of declining educational standards in mathematics and related areas is being largely ignored and unchallenged.