Institute of Mathematical Statistics
Fostering the development and dissemination of the theory and applications of statistics and probability
Renew / Join IMS
Obituary: Clifford H. Spiegelman 1949–2020
July 16, 2020 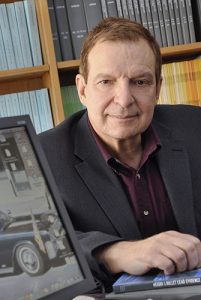 Clifford H. Spiegelman, Regents Professor and distinguished professor of statistics at Texas A&M University and a leader in statistical and environmental forensics, passed away May 14 in College Station at the age of 71.

For over 40 years, Cliff Spiegelman applied his statistical expertise to chemistry, forensic science, medicine and related problems across multiple disciplines, to help free innocent people, re-evaluate history and develop sharper analytical tools for society. In perhaps the most visible and pioneering example, his expertise was key as a member of an NRC committee tasked with evaluating the effectiveness of comparative bullet lead analysis, a forensic method most notably used in the investigation of the 1963 assassination of President John F. Kennedy. He was instrumental in the FBI’s 2005 decision to stop using the widespread technique, after he demonstrated it to be fundamentally flawed, and also part of a related study that determined the same for evidence used to rule out a second shooter in the Kennedy assassination—earning him the 2008 ASA Statistics in Chemistry Award.

A native of Long Island, Cliff earned a BA in economics, math and statistics at The State University of New York at Buffalo in 1970, and both his MS (managerial economics, 1973) and PhD (statistics and applied math, ’76) at Northwestern University. Prior to Texas A&M in 1987, he worked in the Statistical Engineering Division at the National Bureau of Standards (now known as NIST) in Gaithersburg, 1978–87, following a year at Florida State University. He also held visiting faculty appointments at Northwestern, Johns Hopkins and Lamar universities. Spiegelman was appointed in 2009 as a distinguished professor of statistics, Texas A&M’s highest honorific rank for faculty. He was designated a Regents Professor in recognition of his exemplary contributions to Texas A&M and the people of Texas. A senior research scientist with the Texas A&M Transportation Institute, he had also served since 2017 as the inaugural Official Statistician of the Texas Holocaust and Genocide Commission, as well as statistical advisor to the Texas Forensic Science Commission. For many years he also was the key statistical advisor to the City of Houston’s crime lab.

Cliff was a founder of the field of chemometrics. In 2017, the international journal he co-founded, Chemometrics and Intelligent Laboratory Systems, celebrated his 30-plus years of service to both the publication and the discipline he helped create with a virtual special issue in his honor. An active researcher and scholar, Cliff authored more than 200 refereed publications, and contributed to five books and dozens of conference proceedings, reviews and editorials.

During the past two decades, Cliff was quoted in many contexts by national media, most notably on his research showing the statistical limitations of some of the forensic techniques commonly presented as evidence in the justice system, including bullet fragment analysis. He routinely testified in criminal matters related to various aspects of statistics, flawed forensic science, probability and the law—often in association with the Innocence Project, the national nonprofit legal clinic dedicated to exonerating wrongfully convicted people through DNA testing and other post-verdict methods. He was among a distinguished group of statisticians, legal scholars and scientists from other fields who regularly collaborated with the Innocence Project on amicus briefs to help educate the courts on the limitations of forensic techniques. For many years, he worked with judges and attorneys to broaden their understanding of statistics and the critical effect it often has on case outcomes and broader issues. Recently he had been working with colleagues and US legislators to introduce bipartisan legislation that would enter existing forensic evidence collected at crime scenes during the civil rights era into forensic databases. He strongly believed this would help pave the way for countless decades-long cold cases potentially to be solved.

Spiegelman was a fellow of IMS, ASA and AAAS, and an elected member of the ISI. He received the ASA’s 2007 Jerome Sacks Award recognizing innovation in statistical science and the ASA’s San Antonio Chapter 2016 Don Owen Award for excellence in research, contributions to editorial activities and service to the statistical community. Most recently, he was honored with Sigma Xi’s 2019 Outstanding Science Communicator Award.

Cliff Spiegelman is survived by his wife Kathy and their two daughters, Lindsey and Abigail, and his daughter Rachel from a previous marriage.

This obituary is condensed with permission from the one on the Texas A&M University Science Faculty website. There is also a tribute to Cliff on the Innocence Project website.