Institute of Mathematical Statistics
Fostering the development and dissemination of the theory and applications of statistics and probability
Renew / Join IMS
Obituary: Richard M. Dudley, 1938–2020
May 17, 2020 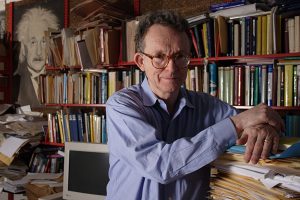 Over the course of those 48 years, during which he published over 100 articles as well as numerous books and monographs, Dick Dudley worked on a broad range of topics in probability, statistics and mathematical analysis, including weak convergence of measures, Gaussian processes, probability in Banach spaces, empirical processes and uniform central limit theorems, Lorentz invariant Markov processes, Wiener functionals, random walks on groups, sequential convergence, singularity of measures in linear spaces, prediction theory, Bayesian statistics, hypothesis testing, Fréchet differentiability of nonlinear functionals in p-variation norms, and approximation theory. Dudley made fundamental breakthroughs in the theory of stochastic processes and the general theory of weak convergence, in particular, by developing a version of the theory of weak convergence of measures in non-separable metric spaces and by studying metrizability of weak convergence. Dudley’s work, starting in the 1960s, had a profound impact on the fields of probability and mathematical statistics. His highly influential contributions to the theory of Gaussian processes and empirical processes have become a standard tool of modern research in several areas of contemporary statistics and in machine learning. In particular, Dudley’s work in the late 1960s along with the work of Sudakov, Fernique and Strassen changed the paradigm in the study of Gaussian processes by highlighting the role of intrinsic metric structure associated with the process and by introducing “Dudley’s entropy bound”, the main tool in the study of boundedness and continuity of Gaussian processes. Ultimately, it led to the development by Talagrand of generic chaining bounds that provided a characterization of these properties of Gaussian processes.

Dudley’s work also transformed the theory of empirical processes initiated by Vladimir Vapnik and Alexey Chervonenkis in the context of machine learning. Along the way Dick wrote 281 reviews for Mathematical Reviews, including reviews of two of the key papers by Vapnik and Chervonenkis which appeared in 1968 and 1971 (his Russian language skill gave Dick an edge). In a sequence of papers, starting with his landmark paper Central limit theorems for empirical processes (Annals of Probability, 1978) and continuing with his influential Saint-Flour lecture notes (1984) and later, his book Uniform Central Limit Theorems (Cambridge University Press, 1999 & 2014), Dudley refined and developed these ideas into a working body of theory and tools that remains today as the reference framework in mathematical statistics and statistical learning theory. In particular, he developed a mathematical framework for the study of central limit theorems (CLT) for general empirical processes and obtained the first sharp results on CLT in terms of bracketing entropies as well as CLT on Vapnik–Chervonenkis classes.

The wider communities of probability and statistics will remember his excellent taste for mathematically rich and important subjects, as well as his highest standard of rigor, and his careful precision and attention to history in the “Notes” sections of his several books.
Dudley gave a number of distinguished research talks. He was an invited speaker at the 1974 International Congress of Mathematicians in Vancouver, Canada. The published version of his talk includes a venture into verse, humorously and sympathetically lamenting the naming of Gaussian processes for C. F. Gauss rather than Abraham de Moivre.

He also presented invited lectures at meetings of the American Mathematical Society, the Institute of Mathematical Statistics, and the Bernoulli society. He was an invited lecturer at the Saint-Flour probability summer school in probability in 1982 and several of the Vilnius Conferences on Probability Theory and Mathematical Statistics. He was a regular participant and organizer of multiple conferences and meetings, including a series of meetings on Probability in Banach Spaces (which have morphed into a further series on High-Dimensional Probability). In 1976, Dudley visited the University of Aarhus. While there he produced a set of graduate lecture notes, Probabilities and Metrics. These became a part of his graduate text, Real Analysis and Probability, published by Wadsworth, Inc. in 1989. An early review of this work in the London Mathematical Society Bulletin (July 1990) found that it “could be compared to the appearance of Breiman’s or Loève’s classic probability texts.” The text has since become a standard: in 2002 was reissued by Cambridge University Press and is still in print.

Dudley was always highly regarded as a graduate mentor throughout his career. He advised 33 PhD candidates (32 at MIT), yielding some 105 academic descendants.
Dudley served the IMS as associate editor (1972–78) and then editor (1979–81) of the Annals of Probability. During this period he continued writing reviews for Mathematical Reviews, completing 30 reviews while serving as Editor of AOP. Dudley was a member of the editorial board of the Wadsworth & Brooks/Cole Advanced Series in Statistics/Probability from 1982–92.

Among his honors, Dudley was an Alfred P. Sloan Research fellow from 1966–68 and a Guggenheim Foundation Fellow in 1991. He was selected to serve on the honorary Advisory Board of Stochastic Processes and their Applications from 1987-2001. In 1993, Dudley was elected a fellow of the ASA, “for world-recognized contributions to probability theory with far-reaching consequences for statistics, for founding the modern theory of empirical processes, and for dedication to many successful PhD students.” He was also elected fellow of IMS, the American Association for the Advancement of Science, and the American Mathematical Society and was an elected member of the ISI.

Dick was an enthusiastic hiker in the Appalachian mountains and contributed as the editor of the Appalachian Mountain Club White Mountain Guide in 1979. He also loved classical music and, in the last years of his life, he contributed to Wikipedia articles about several composers, including Amy Beach, Dvorák, Mozart, and Clara Schumann.

Dudley is survived by his wife, Elizabeth (Liza) Martin; his sisters, Edith D. Sylla and Alice D. Carmel; brother-in-law Richard E. Sylla; and nieces Anne Sylla, Margaret S. Padua, and Genevieve Carmel. Memorial contributions may be made in Dudley’s name to the Environmental Defense Fund or to Partners in Health.

—
Adapted by Jon Wellner and Vladimir Koltchinskii from an obituary posted by the MIT Mathematics Department and from the Preface and “A Biographical Sketch of Richard M. Dudley” published in Selected Works of R. M. Dudley, Springer, 2010.