Institute of Mathematical Statistics
Fostering the development and dissemination of the theory and applications of statistics and probability
Renew / Join IMS
Obituary: Mark H.A. Davis 1945–2020
May 17, 2020 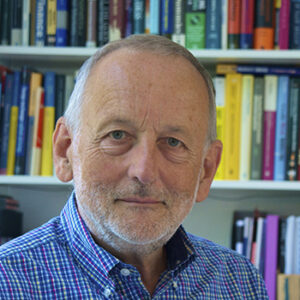 Occasionally, a mathematician passes on who is much more than the sum of his work, considerable as that might be. A person, perhaps, whom people felt the better for having known. A person who always had a smile, a glint in the eye, a beguiling charm, a ready happiness to have seen you again. Such a person might have been named Mark H.A. Davis.

I had a theory about the British. They have so few surnames that they need several middle names to uniquely identify themselves. Mark H.A. Davis seemed to be a case in point. I once asked him if the H.A. served a purpose, perhaps as a unique identifier? He told me his full name was Mark Herbert Ainsworth Davis, and it was his mother’s doing, and he explained her choices of Herbert and Ainsworth. He cleverly avoided answering my question.

Mark H.A. Davis did much more than heal the souls of those he knew. He was also an eminent mathematician, a builder of theories, of journals, of programs, and a catalyst for young researchers.

Born on April 25, 1945, Mark graduated from Cambridge in 1966. His PhD was from UC Berkeley in 1971, working with Pravin Paraiya in Electrical Engineering, on dynamic programming in a non-Markovian context, developing a version of what is now known as an optional Doob–Meyer decomposition theorem. Trained at Cambridge, he was more of a mathematician than an electrical engineer, and he worked in stochastic control theory and filtering theory, emphasizing martingale techniques, leveraging the subject from Tyrone Duncan’s course at Berkeley in 1969–70. He became editor of the journal Stochastics in 1978—for 17 years. During his tenure the journal was at the cutting edge of the boundary between electrical engineering, filtering theory, and stochastic analysis. It was a desirable place to publish.

Control theory was rapidly dying as a research subject, because the major problems of controlling the drift of a diffusion had been solved, using Girsanov’s theorem. Thanks to the pioneering work of Black, Scholes and Merton, a few young researchers — among them N. El Karoui, I. Karatzas, S. Shreve, and Mark Davis himself — discovered that in Mathematical Finance one needed to control the diffusive term, and not the drift, requiring new ideas and new techniques. Math Finance gave a new lease on life to control theorists.

Even though the work of Black, Scholes and Merton appeared in the early 1970s, the subject did not really take off until the seminal works of J.M. Harrison, D. Kreps, and Stan Pliska in the 1980s, tying the subject to martingale representation. That was an interest of Davis, and he did some important work in that domain, and quite naturally moved into Math Finance.

In 1995, Mark forsook the academy and took a position in industry: Director and Head of Research & Product Development for Mitsubishi Finance (later renamed Tokyo–Mitsubishi International). His team worked on risk analysis and pricing models. Some felt it was a loss for such a talented man as Mark to do such a thing—but he surprised the skeptics by returning to the academic fold, to Imperial College, in 2000. He returned with a profound understanding of both finance and math finance (two different subjects) and he started a masters’ program in Math Finance at Imperial, training the future quants of the City of London. He also resumed active research, and fostered communication and the dissemination of knowledge in Oslo, Vienna and the United States.

Mark received his fair share of honors. He was elected to be a Fellow of IMS, the Institute of Actuaries (Honorary), and the Royal Statistical Society. Impressively, he was awarded the Naylor Prize by the London Mathematical Society in 2002.

Mark’s research spanned multiple areas. Most notably he worked in utility maximization with transaction costs, portfolio credit risk contagion modelling, risk sensitive control and management, and robust pricing and hedging. He also tackled the complicated world of credit contagion, a subject of great relevance in society today, especially after the events of 2008.

Mark passed away in a hospice in London, due to cancer, on March 18, 2020, at the age of 74. For those of us lucky enough to have known Mark, we will remember him most for his smile, his kindness, his generosity of spirit, and his ability to turn any event, no matter how frustrating, into one of little consequence. His perspective, wisdom and delightful presence will forever be missed.