Institute of Mathematical Statistics
Fostering the development and dissemination of the theory and applications of statistics and probability
Renew / Join IMS
Carver Award: Lynne Billard
May 17, 2020 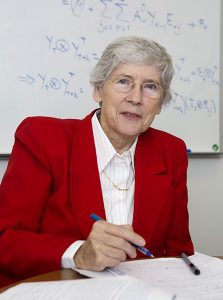 We are pleased to announce that the IMS Carver Medal Committee has selected Lynne Billard to receive the 2020 Carver Award. Lynne was chosen for her outstanding service to IMS on a number of key committees, including publications, nominations, and fellows; for her extraordinary leadership as Program Secretary (1987–90), culminating in the forging of a partnership with the Bernoulli Society that includes co-hosting the biannual World Statistical Congress; and for her advocacy of the inclusion of women and young researchers on the scientific programs of IMS-sponsored meetings.”

Lynne Billard is University Professor in the Department of Statistics at the University of Georgia, Athens, USA.

Lynne Billard was born in Toowoomba, Australia. She earned both her BSc (1966) and PhD (1969) from the University of New South Wales, Australia. She is probably best known for her ground-breaking research in the areas of HIV/AIDS and Symbolic Data Analysis. Her research interests include epidemic theory, stochastic processes, sequential analysis, time series analysis and symbolic data. She has written extensively in all these areas, publishing over 250 papers in leading international journals, plus eight books, and chapters in a number of acclaimed edited volumes.

Lynne has served as president of the American Statistical Association and the International Biometric Society, only the third person to have led both organizations. She also served as principal investigator for “Pathways to the Future,” an annual NSF workshop which ran from 1988–2004 and focused on mentoring women who had recently received PhDs in Statistics, and were primarily entering academic positions.

Among her awards, in 2011, Lynne Billard received the tenth annual Janet L. Norwood Award for Outstanding Achievement by a Woman in the Statistical Sciences, and she was selected by COPSS to receive the 2013 F.N. David Award and the 2008 Elizabeth Scott Award. She is a Fellow of IMS and ASA, and an elected member of the ISI. From the ASA, she received the 1999 Samuel Wilks Award (for research) and the 2003 Founders Award (for service).

You can read more about Lynne’s life and career, in conversation with Nitis Mukhopadhyay, in the 2017 Statistical Science article (Vol 32, No. 1, pp.138–164): see
https://imstat.org/journals-and-publications/statistical-science/conversations/.