Institute of Mathematical Statistics
Fostering the development and dissemination of the theory and applications of statistics and probability
Renew / Join IMS
Obituary: Susan Ruth Wilson, 1948–2020
March 31, 2020 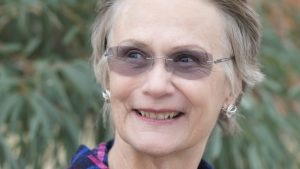 Susan (Sue) Wilson was born in Sydney on March 19, 1948. She was an undergraduate at the University of Sydney from 1965–1968, completing a BSc with First Class Honours, and she completed her PhD at the Australian National University (ANU) under the supervision of P.A.P. (Pat) Moran. The title of her dissertation, for which she was awarded the 1975 Peter William Stroud Prize by the ANU, was Some Statistical Results in Genetics (1972).

Sue took up a lectureship in the Department of Probability and Statistics at the University of Sheffield in 1972 but returned to ANU in 1974 when she took up a position as Research Fellow in Pat Moran’s Department of Statistics in the ANU Institute of Advanced Studies. She became a Fellow in 1976 and a Senior Fellow in 1984. Between 1988 and 1996, Sue held various appointments jointly with the National Centre for Epidemiology and Population Health (NCEPH) at ANU and the Statistics Research Section in the School of Mathematical Sciences at ANU. This latter group became the Statistical Science Program in the Centre for Mathematics and its Applications (CMA), which Sue joined in 1991. She was promoted to Professor in 1994. She was co-founder and Director of the Centre for Bioinformation Science, which was set up as a joint research centre between the School of Mathematical Sciences and the John Curtin School of Medical Research in 2001. Sue became a Professor Emeritus of Bioinformation Science and Statistical Science at ANU and an Honorary Professor in the School of Mathematics and Statistics at the University of New South Wales in 2008.

Sue was an elected member of the International Statistical Institute (ISI, 1979), elected Fellow of the American Statistical Association (ASA, 1991) and elected Fellow of the IMS (1995). She was the Editor of the Institute of Mathematical Statistics Bulletin from 1993–1997 and the President of the International Biometric Society (IBS, 1998–1999). During her tenure, the IBS established the Sub-Saharan Network (SUSAN). Sue was awarded the inaugural E.A. (Alf) Cornish Award by the Australasian Region of the International Biometric Society for her contributions to Biometrics (2011), and Honorary Life Membership of IBS “for outstanding contributions to the development and promotion of the discipline of Biometry,” in 2012. Sue was made an inaugural Senior Fellow of the Australian Bioinformatics and Computational Biology Society (2017).

Sue’s early research interests were in statistical genetics and from there, they spread into biostatistics, population health and bioinformatics. She had important research collaborations with J.G. Oakeshott (measuring selection on Drosophila populations), A. Thorne (physical anthropology), G.K. Ward (radiocarbon dating), J. Cavanaugh (mapping human disease susceptibility genes), P.J. Solomon (modelling and predicting the spread of AIDS in Australia) and C.J. Burden (Bioinformatics). Her later interest in bioinformatics was driven by a passion for developing rigorous statistical techniques for analysing and interpreting the large-scale genomic data that has become the basis of modern biology. She published over 200 refereed publications in applied statistics and bioinformatics. Many of these papers were motivated by substantive research questions she met when consulting in the biological and medical sciences.

For much of her career, Sue held research appointments. She was, however, always cognizant of the importance of educating younger researchers and passing on knowledge. Before the teaching of bioinformatics had become established in Australia, Sue was instrumental in setting up the annual BioInfoSummer Summer Symposia in Bioinformatics in 2003. BioInfoSummer is now established as Australia’s major annual educational meeting for graduate students and early-career researchers in bioinformatics. Sue was particularly kind to, and supportive of, early career researchers, still proofreading and assisting to the end with Discovery Early Career Research Award (DECRA) applications. Indicative of her generosity towards young researchers was her endowment of a scholarship for honours students in mathematical biology in memory of her close friend and colleague Hilary Booth, and travel awards to enable undergraduate students to attend conferences in statistical science.

Sue is survived by her son, Jonathan.

This obituary was first published on the website of the Mathematical Sciences Institute at ANU College of Science.