Institute of Mathematical Statistics
Fostering the development and dissemination of the theory and applications of statistics and probability
Renew / Join IMS
Obituary: David John Finney, 1917–2018
March 31, 2020 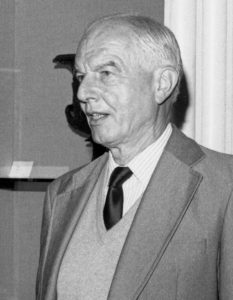 David John Finney was born in Warrington, UK, on January 3, 1917. His mathematical abilities were recognized by the local school and his parents were advised to transfer him to Manchester Grammar School. From there he won a scholarship to Clare College, Cambridge, to study mathematics, until a health scare interrupted his studies: statistics lectures from John Wishart stimulated his interest in the subject. He then worked for a postgraduate year with Wishart, before being awarded a Ministry of Agriculture scholarship to work with Ronald Fisher on human genetics—a stream of papers on the detection of linkage appeared over the next six years. Just before the start of the Second World War, he was invited by Frank Yates to go to Rothamsted to replace Bill Cochran who was moving to Iowa. David always said it was his good fortune to spend the war years in a research station in the countryside. There was nothing to do except work and play tennis. The variety of work was exceptional, working closely with a variety of scientists. Yates and Fisher were always at hand. He developed research in sampling, in experimental design (notably on Latin squares, fractional replication and split plots), and in bioassay. The research on bioassay arose from insecticide studies, which were urgent because of the UK’s need to feed itself in wartime.

The two books Probit Analysis (1947) and Statistical Method in Biological Assay (1952) redefined that subject and are the works by which he is most widely known. To overcome computational problems with likelihood equations, he developed elegant iterative algorithms for hand calculation on Brunsviga calculators. He was still calculating mechanically, using a Curta calculator on the bus to and from work 20 years later. When radioimmunoassays were introduced he developed important new methodologies that were appropriate for the new types of data.

In 1945, Oxford University founded a lectureship in the design and analysis of scientific experiment, for which Fisher encouraged him to apply. At that point, London was the only university with an undergraduate degree in statistics, and David wanted to institute such a degree in Oxford. To gain approval would have required years of involvement in university politics, so, as an easier compromise, he set up in 1947 the first postgraduate taught diploma course in the UK, supported by statisticians in other departments in the university. He always sought to encourage non‐mathematicians, particularly biologists with some numerical skills, to become statisticians, and he created a preliminary Certificate year—repeating this structure at his two later university posts in Aberdeen and Edinburgh. His ideal teaching structures to create practical statisticians were published in Biometrics in 1968, and his advice to the consultant biometrician in Statistics in Medicine in 1982.

In 1949, he was invited by Gertrude Cox to teach at her summer school in Chapel Hill, the first of many trips combining statistics and travel. It was a fruitful trip: the lectures that he gave formed the basis of the book on Bioassay, and on the return voyage he met Betty; they married in 1950. In 1952 he was invited by the UN Food and Agriculture Organisation to spend a year in India with the research group equivalent to the statistics group at Rothamsted. He returned to find that Fisher and Yates had persuaded the UK Agricultural Research Council that Rothamsted could no longer cope with the geographical spread of research stations and that they should invite David to set up an Agricultural Research Council Unit of Statistics for Scotland in Aberdeen. The University simultaneously, under pressure from the gynaecologist and epidemiologist Sir Dugald Baird, set up an academic department with David as Reader (becoming Professor in 1964). He took with him to the Unit one of his lecturers, Michael Sampford, and one of his non‐mathematical Certificate students, Andrew Rutherford, to run the vast national surveys that were required. His main research interest at the time concentrated on the design of sequential selection procedures to find the best of a large number of candidates, whether plant varieties or drugs or educational achievement, formulating the problem as that of maximizing the expected worth.

A sabbatical year at Harvard University in 1962–63 changed his future in two ways. Firstly it showed him limitations in Aberdeen life so that, when the Agricultural Research Council decided that their Statistics Unit would be better situated in Edinburgh, he supported the move. Simultaneously in 1966 the University of Edinburgh, which was keen to redevelop statistics after the retirement of A.C. Aitken, created a Chair and a new Department for him. He remained head of both entities until his retirement in 1984. Secondly, his American medical colleagues were discussing the recent thalidomide tragedies and encouraged him to consider what statistics could do to identify adverse reactions to new drugs early in their use. In 1963, he became one of the founding members of the Adverse Reactions Sub‐Committee of the UK Committee on the Safety of Medicines, remaining involved for over 30 years.

His thoughts developed into a series of reports and papers which greatly influenced the monitoring system now set in place by the World Health Organization in more than 130 countries. For this work he was awarded the Paul Martini Prize (for clinical pharmacology) in 1971.

From then on, public service became an increasing part of his life. In 1966, he was invited to be a member of the Flowers Committee determining the way in which computing should develop in UK universities and research institutes, becoming Chairman for a further four years when Lord Flowers retired in 1970. He was highly impressed by the then Minister for Education, Margaret Thatcher, who quickly grasped the urgency and the problems of setting up a national provision. He also served as President of the International Biometric Society (1964–65) and of the Royal Statistical Society (1973–74). After retirement he was Director of the ISI Research Institute in 1987–88. He served for many years on other advisory committees, including the Food and Agriculture Organisation (becoming Chairman in 1975), the World Health Organization, the Cotton Growing Corporation, the International Rice Research Institute, the Building Research Station, the Wildfowl and Wetlands Trust and the BBC. In most cases his work ranged from policy advice to the detail of design of specific research and analysis of the resulting data.

Recognition and honours followed—Fellowship of the Royal Society and of the Royal Society of Edinburgh in 1955, the Weldon Memorial Prize in 1956, Commander of the British Empire in 1978, four Honorary Doctorates (City, Gembloux, Heriot‐Watt and Waterloo), Honorary Fellowship (or equivalent) of three societies (Biometric, Eugenic and Adolphe Quetelet).

He recognized that he was not a good teacher of undergraduate mathematicians, expecting too much knowledge and maturity (his own first paper, in Biometrika, was published while he was an undergraduate). He supervised few research students, believing that, as he described his own time with Wishart, “an introduction to research in an unstructured manner [is] far better for statisticians than the narrow road of a PhD.”

His staff benefited enormously from his commitment to careful scientific thought and clear verbal and numerical presentation. Draft papers submitted for comment would be returned the next day covered with substantive and presentational improvements. His irritation at misuse of logic, inference, nomenclature or language remained throughout his whole life and he continued advising and publishing comments into his 90s, becoming more polemical with age. Yet, while castigating imprecise thought, he intensely disliked formal, inflexible rules, whether in statistical practice—e.g. multiple comparisons, outlier rejection and significance stars—or in bureaucratic administration or societies’ constitutions, arguing that local detailed knowledge of a particular case had to be able to be incorporated.

His greatest skills lay in the assessment and interpretation of data, the inferences that could validly be drawn and the planning of efficient programmes to improve their quality, coupled with the ability to discuss such issues in a convincing way with the scientists or administrators involved. Junior staff were actively helped to develop in the same way. I watched him look for half a minute at 60 rows of 30 columns of hand‐written six‐figure numbers and say that three looked wrong—an assertion that was supported later by more detailed analysis. Numbers were interesting, but always to be seen in context. His credo, as expressed in 1956, was that: “The aim of statistical science must always be to aid the research worker in making the best possible use of his efforts and his results.”

His declared leisure interests were travel (active), music (passive) and the “three Rs”. Holiday travel ranged from a month’s cycle trip in 1947 across Scandinavia with David Kendall, up to visits to Petra and to Chile in the new millennium. (I can visualize his red pen through that phrase—to him, 50, 100 or 1000 were no more interesting than any other numbers.)

David Finney died peacefully on November 12th, 2018, aged 101 years. His wife Betty had predeceased him; he leaves their three children, Deborah, Robert and Katharine, six grandchildren and two step‐grandchildren. Colleagues and their families will remember David and Betty with respect and affection, for their warm interest in our interests, and their help and compassion when we needed them.