Institute of Mathematical Statistics
Fostering the development and dissemination of the theory and applications of statistics and probability
Renew / Join IMS
Obituary: Janos Galambos 1940–2019
February 17, 2020 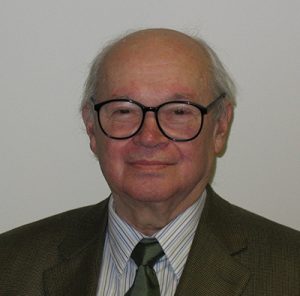 Professor Janos Galambos, a well respected and influential mathematician, passed away on December 19, 2019 at the age of 79. Galambos is survived by his wife, Éva Galambos.

Janos Galambos was born in Zirc, Hungary, on September 1, 1940. He entered Eötvös Loránd University in Budapest in 1958 and graduated with a PhD in 1963, under the supervision of Alfréd Rényi.

Galambos was a devoted researcher whose work spanned a variety of topics in mathematics. He contributed to the theoretical development and applications of probability, number theory, and statistics.

His dissertation dealt with probabilistic inequalities, and he continued in this direction for many years. He mainly worked on Bonferroni-type inequalities — inequalities that are valid in any probability space — and used them as a unifying tool to solve problems in different branches of mathematics. His first paper in the area focused on graph-sieve inequalities. These inequalities originated in number theory, and they were later applied to probability. They turned out to be very important in the derivation of limit theorems in combinatorics, extremes, random subsets, etc.: see, for example, “The role of graph theory in some sieve arguments of probability theory,” In: Graph Theory and Applications (ed.: Y. Alavi et al), Lecture Notes in Math., Springer, 303 (1972).

During his stay at the University of Ghana, Galambos attended seminar lectures given by Sir A. Oppenheim on representation of real numbers by infinite series. He became interested in probabilistic aspects of these series and developed a general theory which culminated in the monograph, Representations of Real Numbers by Infinite Series, Springer-Verlag, Lecture Notes in Mathematics Series, 1976. This monograph ends with a collection of open problems that have inspired the work of many mathematicians since.

His work on multiplicative functions via probability theory motivated the study of a general probabilistic theory of infinite products of random variables. Later in his career he worked on the development of this theory and used it to study the limiting distributions of multiplicative functions and to develop characterization results based on products of random variables.

In statistics, he made seminal contributions to characterization using properties of order statistics and extreme value theory. Galambos’s contribution to extremes has been important not only for its theoretical development, but also for its impact on changing the attitude of the mathematical community towards the subject. His book on extremes, The Asymptotic Theory of Extreme Order Statistics (Wiley, New York, 1978), was the first book on the subject written for mathematicians. The book was translated into Russian in1984, and its second edition was translated into Chinese in 2001.Galambos started his long sequel of papers on extremes by characterizing the limit distribution for the maximum(under proper normalization) of a wide class of dependent random variables. He also contributed to the development of the theory of extremes for i.i.d. random vectors.

Galambos was influential in many other aspects of statistics. His joint work with H.A. David is considered to be one of the fundamental papers on the theory of concomitants: “The Asymptotic Theory of Concomitants of Order Statistics,” (with H.A. David), Journal of Applied Probability 11 (1974). He developed nonparametric tests for extreme value distributions and was instrumental in the development of a methodology for the proper use of extreme value theory in applications.

Galambos wrote over 130 papers and 8 books, and he was also an editor for several books. The importance of his work has been recognized throughout the world: he was a frequent speaker at international conferences and traveled widely as a guest of universities and scientific institutions. He was an elected member of the Hungarian Academy of Science, the International Statistical Institute and the Spanish Royal Academy of Engineers, and a Fellow of the Institute of Mathematical Statistics.

Professor Janos Galambos will be remembered around the world, not only for his profound work in mathematics, but also for his role as an inspiring teacher and mentor.

You can read more about the work of Professor Janos Galambos in a longer Laudatio that Italo Simonelli wrote: it’s online here.