Institute of Mathematical Statistics
Fostering the development and dissemination of the theory and applications of statistics and probability
Renew / Join IMS
Obituary: Colin R. Blyth 1922–2019
February 17, 2020 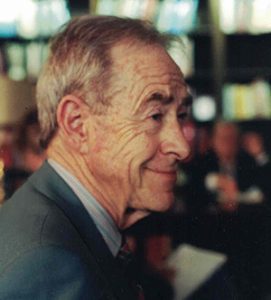 Photograph of Colin R. Blyth taken while he was attending the “Struwwelpeter Reconsidered” conference held at the University of Minnesota, November 9–11, 1995.
Photo: Marion Herzog-Hoinki

Colin Blyth contributed to the development of classical mathematical statistics with over 30 research articles in mathematics, statistics, and geology journals. His thesis was concerned with minimax decision procedures. He was the first to show that the average of a random sample of Gaussian variables is admissible and the method he used to prove this result bears his name. During his career, he wrote papers on topics such as Stirling’s approximation, Simpson’s paradox, Cramér–Rao type inequalities, convolutions of Cauchy distributions, Neyman shortest unbiased confidence intervals, the relative efficiency of tests, as well as hypothesis estimation and acceptability profiles for two-by-two contingency tables.

In recognition of his contributions to the profession, including as an associate editor for JASA (1967–71), Colin was made a fellow of the Institute of Mathematical Statistics (1974) and the American Statistical Association (1975). He was also granted membership to Pi Mu Epsilon and to Sigma Xi, both in 1949.

In his retirement, Colin combined his passions for music and languages to write Gaelic Names of Pipe Tunes in 1994; he also edited Sullivan Ross, Volume 1: A Restored Edition, published in 2010, which provides a unique window on the (bagpipe and violin) music of rural Ontario from 1850 to 1900. Moreover, he composed many poems (e.g., “Kate O’Shanter,” published in Scottish Field in 1993 under the pen-name “Seanair,” Gaelic for Grandfather) and wrote verse translations of mid-19th century German children’s classics: Struwwelpeter Tales of Hoffmann (1995), Struwwelpeter 2000 (2000) and Max & Moritz 2000 (2006).

Colin is survived by his wife of 64 years, Valerie Thompson, and their children, Mary Alice Snetsinger (Rob), Georgina Roche, Colin M. (Trish), Heather (Rob Smith), Alec (Lisa), and Donald, and by nine grandchildren. He will be sorely missed.