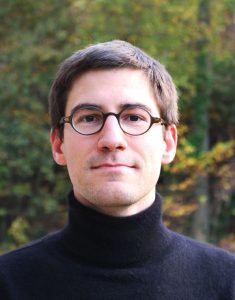 Nicolas Curien is Professor, since 2014, in the Mathematics Institute at Université Paris-Saclay, France. He specializes in probability theory and, more precisely, in random two-dimensional geometry. He received his PhD at Orsay (now Paris-Saclay) in 2011 and then spent two years at Sorbonne University as a CNRS researcher. His main focus is on the study of random discrete structures (such as random trees, random planar maps or graphs) and their scaling limits. He was awarded the Rollo-Davidson prize in 2015 and was a lecturer at the Saint-Flour summer school in 2019.

Nicolas will give this Doob Lecture at the World Congress in Seoul, in August. (See more about the Doob Lecture, honoring Joseph Leo Doob, below.)

The $h$-transformation in the sense of Doob is now classic in probability theory and consists in twisting the transition probabilities $p(x,y)$ of a Markov process using a harmonic function $h(x)$ as follows:
$$ q(x,y) := \frac{h(y)}{h(x)} p(x,y).$$
It can be used, for example, to quickly define processes conditioned on event of zero probability such as conditioning a Brownian motion to stay positive or conditioning an oscillating random walk to stay positive (Bertoin and Doney 1992). On the other hand, enumeration of planar maps (graphs drawn on the plane) is a well-established theory in combinatorics and in recent years it became apparent that some functions appearing in the asymptotic enumeration of maps (with a boundary) turned out to be harmonic functions for certain random walks on $ \mathbb{Z}$. Using Markovian explorations of random planar maps known as the peeling processes (Angel 2003, Budd 2015) those functions can be used via $h$-transformations to define random planar maps conditioned on events of zero probability such as being infinite, having an infinite general or simple boundary or being of “hyperbolic” type.

In this talk, we will survey some of the recent developments in the construction and the study of infinite random planar maps using the peeling process and its connections with random walks.

About the Doob Lecture

The Doob lecture, given in memory of Joseph Leo “Joe” Doob (1910–2004), is generously supported by the Illinois Journal of Mathematics, and is a joint IMS–Bernoulli Society lecture in World Congress years (those divisible by 4); in other years the lecture is given at the Stochastic Processes and Applications conference.

Joe Doob, who was President of the IMS in 1950, was awarded the 1979 US National Medal of Science by Jimmy Carter, for “his work on probability and mathematical statistics, characterized by novel and fruitful ideas of a general character that opened new fields of study which […] now are acclaimed worldwide.” Some of the areas of mathematics to which Joe Doob made important contributions are: complex function theory, ergodic theory, martingale theory, mathematical statistics, Markov processes, the general theory of stochastic processes, and probabilistic potential theory. He wrote the 1953 classic, Stochastic Processes, and two others. His other honors included being elected a member of the US National Academy of Sciences and of the American Academy of the Arts and Sciences. He was President of the American Mathematical Society and was awarded the AMS Career Prize in 1984. His obituary in The Times noted that as well as his work, Joe would also be remembered “for his personal qualities: bluff kindness, good humour and wit, and a complete lack of personal ambition, combined with gritty dedication to a highly technical field of study over a working lifetime of 70-odd years.”