Institute of Mathematical Statistics
Fostering the development and dissemination of the theory and applications of statistics and probability
Renew / Join IMS
Obituary: Murray Rosenblatt, 1926–2019
November 15, 2019 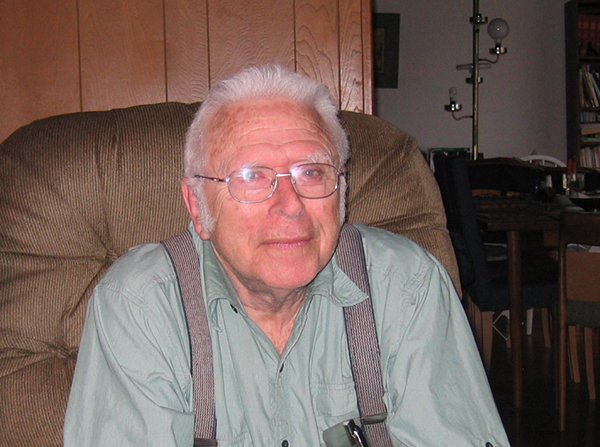 Last month, the probability and statistics communities lost one of their legendary figures. Murray Rosenblatt passed away on October 9, 2019 in San Diego at the age of 93.

Murray was born September 7, 1926, and raised in New York City. After graduating from the City College of New York, he pursued a PhD degree in mathematics at Cornell (1946–49), where he learned from and interacted with an array of outstanding scientists and mathematicians, including Richard Feynman, Philip Morrison, William Feller, and Marc Kac. Although Murray took a number of courses from Feller, he ultimately chose to write his dissertation under the direction of Marc Kac since he would allow Murray “to work on the problems he wanted to solve.” His dissertation, On distributions of certain Wiener functions, considered problems related to the Feynman–Kac formula.

After spending one more productive year at Cornell—not the least which included marriage to Adylin Lipson—the couple moved to Chicago, where Murray began his first academic position in the Committee on Statistics at the University of Chicago. At Chicago he would interact with a large stable of budding statisticians, including Raj Bahadur, William Kruskal, Charles Stein and Leo Goodman, all of whom who would go on to illustrious careers. While at Chicago, Murray began a short but highly productive collaboration on time series with Ulf Grenander, culminating in one of the leading books on the subject, Statistical Analysis of Stationary Time Series (Wiley, 1957), which remains a classic today.

Murray held appointments at University of Stockholm, Columbia University, Indiana University, and Brown University before moving to the Mathematics Department at the University of California at San Diego (UCSD) in 1964, where he would spend the rest of his academic career, retiring in 1994. He was one of the first hires in the mathematics department at the newly created university. These were exciting and heady times to be at a freshly minted university that in a very short time would evolve into a world-class research university. Murray viewed himself as an applied mathematician and enjoyed being a long-time member of the mathematics department at UCSD. On the occasion of his 90th birthday, The Murray and Adylin Rosenblatt Endowed Lectures Series in Applied Mathematics was initiated.

Murray wrote seminal papers on density estimation, central limit theorems under strong mixing, spectral domain methods and long memory processes. In 1956, two of his most cited and celebrated papers, “Remarks on some nonparametric estimates of a density function” (Ann. Statist.) and “A central limit theorem and a strong mixing condition” (Proc. Natl. Acad. Sci. USA), appeared in print. These papers were the starting points for two lines of active research themes, density estimation and central limit theory for mixing sequences, that would continue to this day. The Ann. Statist. paper introduced kernel density estimates and the ideas behind optimal bandwidth selection relative to minimizing mean squared error. In a more probabilistic vein, the PNAS paper introduced the notion of strong mixing, which contains perhaps the most understated sentence in all of Murray’s papers: “The strong mixing condition used in this paper seems to be a more intuitively appealing formalization of this notion than most others.” Even though the PNAS paper has spurred an entire cottage industry related to various mixing conditions and their associated central limit theorems, the basic ideas behind Murray’s original strong mixing remain intact. Perhaps more rewarding, though, is that the concept of strong mixing has become an invaluable tool in methodology. Many of the commonly used time series models satisfy the strong mixing property and hence the central limit applies for a variety of functions of the data including sample means, sample covariances and correlations, and score functions for likelihoods. The latter provides the machinery to establish normality and other optimality conditions for maximum likelihood estimators. The innocuous-looking paper, “Remarks on a multivariate transformation” (Ann. Statist., 1952), now commonly referred to as the Rosenblatt Transformation, has recently become a highly cited and used procedure for testing the goodness-of-fit of multivariate distributions. In a slightly more recent paper, “Independence and Dependence” (Berkeley Symposium, 1961), Murray produces a simple long memory time series for which the sample mean is not normal in the limit. This paper inspired a number of scholars to study limit processes that are associated with long memory. Such limit processes became known as Rosenblatt Processes.

Murray received many accolades and awards for his path-breaking research. He was Fellow of the Institute of Mathematical Statistics, the Society for Industrial and Applied Mathematics, the American Mathematical Society and the American Association for the Advancement of Science; he was a Guggenheim Fellow (1965–1966, 1971–1972) and was elected to the National Academy of Sciences in 1984. He delivered the IMS Wald Lectures in 1970. He has an impressive record of mentoring and advising PhD students (22 dissertations). He was there for his students with great encouragement and support. Together, Murray and Ady served as surrogate parents to many of Murray’s students.

After a courageous fight with cancer, Ady passed away in 2009. Their daughter Karin (of Champaign, IL) and son Daniel (of Live Oak, TX) survive them.

Contributions in memory of Murray Rosenblatt can be made to the Murray and Adylin Rosenblatt Endowed Lecture Series in Applied Mathematics (info can be found at https://giveto.ucsd.edu/giving/home/gift-referral/4810f5ce-6b34-498b-9477-9de96de2b82c).