Institute of Mathematical Statistics
Fostering the development and dissemination of the theory and applications of statistics and probability
Renew / Join IMS
Keeping our research FAIR
September 30, 2019

The International Council for Industrial and Applied Mathematics (ICIAM) is a worldwide organisation for professional applied mathematics societies—including IMS—and for other societies with a significant interest in industrial or applied mathematics. At the ICIAM Congress in Valencia in July, discussions took place at the meeting of presidents and the ICIAM Board about the new FAIR (findable, accessible, interoperable and reusable) principles concerning research data that could affect the practices of our communities in a significant way in the near future.
Volker Mehrmann, TU Berlin’s Institut für Mathematik, who is president of the European Mathematical Society and an Officer of ICIAM, writes:

In many European countries, notably in Germany, there is a strong movement that all research data should be freely available according to the FAIR principles (findable, accessible, interoperable and reusable). See the LIBER (Association of European Research Libraries) document: https://libereurope.eu/wp-content/uploads/2017/12/LIBER-FAIR-Data.pdf 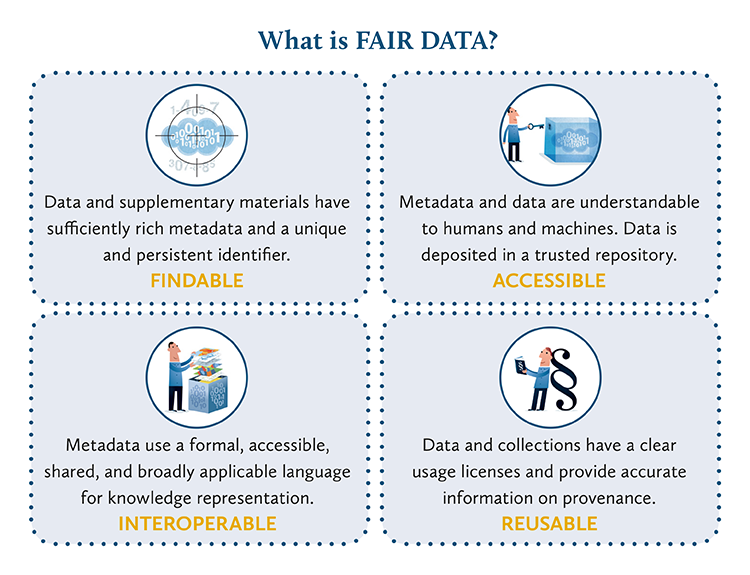 Image describing the FAIR principles, that data should be findable, accessible, interoperable and reusable

In principle, FAIR is a laudable goal that will improve the openness of science. Of course, this is a major challenge for scientists who produce massive data, e.g. from numerical simulations, or physical experiments. In addition, the ways in which data and standards are defined also poses some serious challenges for mathematical research as a whole, by including non-traditional forms of “data”, such as mathematical formulas and theorems.

How, and in which formats, can we standardize the way to find mathematical formulas or mathematical theorems, when different communities use different terminology for the same objects—and the same formulas for different objects?

The German Research Foundation, DFG, has recently issued a large call for building research data infrastructure to deal with this, see e.g. https://www.dfg.de/en/service/press/press_releases/2018/press_release_no_58/index.html

Most people in the mathematical community seem to ignore these developments, but this may lead to real threats for the community if we do not join the movement right from the beginning. Examples of such threats could be that standards will be fixed that are incompatible with our current way to produce mathematical articles (in LaTeX) and PDF, or that the way formulas are stored is just graphically. Another problem may be that standards are created for model generation, mathematical software, or simulation data that are cumbersome or impractical. It is clear that commercial code providers are heavily lobbying governments to make standards that are good for them, and that IT companies and data analytics people have their own views of how data should be addressed.

The mathematical community must unite in a common quest to be on board right away in the developments. (The German math community has already decided to do this.) We must make these principles realistic for mathematics and the neighbouring sciences, and preserve and improve established publishing standards so as to be able to deal with future developments. This may also require the construction of new and uniform concepts, such as semantic annotation of formulas or theorems.